When Emily Love Morrison, the talented voice and mind behind But Love Is My Middle Name!, steps on to the stage, she’s packing more than just an acoustic guitar and a venti Starbucks latte. She’s also escorting her history, her vision, and a vibrant brand of story-telling sung in a key all her own. 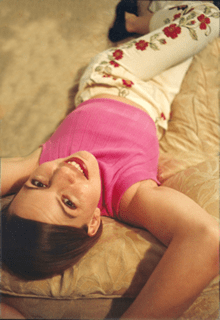 But Love is My Middle Name! is a creatively-woven collection of stories from Morrison’s frenzied love life told over the course of a recording session with her producer, played by Bradley Foster Smith. Smith also doubles (and triples, and quadruples) as all of the men that have paraded in and out of Morrison’s past. The piece is a vivid tapestry of experience and mediums featuring monologues, flashbacks, PowerPoints, original acoustic numbers, and even dance breaks.

The third character in the production is the music, just as influential in her life as the ex-boyfriends and almost-lovers she comically and tragically recounts. She performs originals and segments of covers, but also boasts a touching and well-chosen soundtrack, which drifts easily over the story’s flashbacks. While some of us may feel as though our lives’ seminal moments deserve their own scores, Morrison brings this sentiment to life, doing so with a grace and earnestness.

Because the piece wears many hats, it occasionally feels the strain of transition. There’s a small excess of musical interlude, and at times Morrison relies too heavily on music to tell the story when her words are enough.

Regardless of the bumps, the show is fresh and unapologetic, never attempting to be anything but itself.  Unique, quirky, energetic, hilarious, and engaging. Morrison takes no prisoners with her striking form of narrative. During her most vulnerable heart-breaks and disappointing road-blocks, it is you, the audience, who is the captive in her life, and happily so.

Morrison refers to herself as afflicted with “wanderlust,” enduring an appetite for life and love that is enviable and inspiring. We all haven’t the guts to sneak past London customs, move our lives to opposite coasts, or flourish as fixtures in the New York City club scene and fashion world. But for an evening you can step inside Emily Love Morrison’s head, where the journey never ends and the music is always on.

Sarah rates this a 4 out of a possible 5.