They can take away your home, but they can’t take your spirit. Sara Josephine James knows this better than any of us — she’s responsible not only for her own spirit but for numerous others as well. 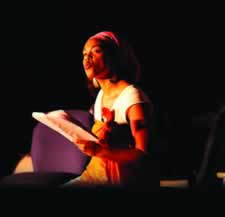 In this magical little fable, set in modern-day DC, we follow young Sara (Araba Brown) as she laces her prayers and dreams together with the voices and memories of her ancestors and loved ones past. At the same time, her earthly actions send her hurrying through this urban world — from DC to New York City — wondering about her rightful place.

Directed by Eric Ruffin from a script by New York playwright Nina Angela Mercer, Sara’s story makes for an often-interesting if not quite fully-realized stage play, invigorated by the occasional blending of movement and live music with Mercer’s scenes of realism.

The script doesn’t allow for very much character growth, and only a couple of the actors’ performances capture something fresh and stirring in their roles as young city dwellers. But when Ruffin and his crew allow their imaginations to really take flight, some touching and beautiful moments arise.

Several scenes, memorably transform without warning into creative sequences of choreography and movement-based poetry, capturing something unique about how Sara communicates with the spirits. These refreshing, dream-like interludes — driven by live music from well-known Go-Go drummer Ju Ju and his onstage band The Pocket Roll Call — seem to be Mercer’s main point of interest.

The story she tells in-between, on the other hand, starts with a bang but loses steam quickly. Sara and her friends, rocked by the death of one of their companions at the hands of the city, take up arms (and a few cans of spray paint) to start a protest movement. The dominos start to fall, the group of friends has to face up to the consequences of their actions, and soon they’re back to where they were before: struggling to stay afloat, make a living, and keep their hearts afire in a world that continually tries to snuff out the light inside.

Halfway through the show, we’re left wandering alongside Sara, but most of the truly interesting questions about the world she inhabits have yet to be asked, let alone explored or answered.

What does it mean to those around Sara that she can speak to the past and present souls of this world? What does it change about how she behaves – and how others behave around her? When, specifically, does her connection to spirits strengthen and comfort her, and when do the voices haunt her and compromise her dreams?

These and other central questions feel unresolved by the author. We enjoy the several sequences of Sara swimming through the spirit world, but it’s unclear how, if at all, such powers arm her to stand up for who she is. If there is some drama inherent to Sara’s unique talent, isn’t it that she’d attempt to use it to some noticeable effect against the system she continually proclaims is bringing her down?

Gypsy & The Bully Door is not without some real heart, and the cast of eight actors (six of them recent Howard graduates) make some smart work of their roles. Jeffrey Dorfman’s set design, mostly walls of wooden frames covered by plastic sheeting, creates an appropriately sad and eerie environment.

It’s a well-staged production of Mercer’s play, which was workshopped in late May at the Classical Theatre of Harlem in NYC. Here it’s brought to life by Ocean Ana Rising, an arts and community engagement non-profit based in NYC and DC that focuses on making the world healthier for women of color (Mercer also serves as the organization’s Executive Director). Despite some foggy plot points, and a script that doesn’t quite loop all its ideas together, the whole turns out to be an appealing, sturdy work – happily endowed with the spirit to invent and imagine.