They lie who say that Ah, Wilderness! was Eugene O’Neill’s only comedy. Strange Interlude is funnier and more savagely incisive. Where Ah, Wilderness! was a sepia-tinted journey to O’Neill’s past, softened by the illusions that memory manufactures, Strange Interlude is twenty-three years in the bright light of the present tense, where characters live in the delusional belief that they are motivated by nobility when they are really sparked by appetite, desire, envy, mendacity, greed and fear.

The answer is that it’s the human comedy, which is about all of this, and about many other sad things beside. Mark Twain held that all comedy proceeds from pain and the great Rowan (“Mr. Bean”) Atkinson once said that the essence of comedy is selfishness. Strange Interlude, as it spreads itself before us on the stage of the Shakespeare Theatre’s Harman Hall, is a symphony of pain and selfishness, which dissolves, ultimately, in laughter.

Let’s start with the play’s most famous characteristics – except for its length – the asides. One of the great pleasures of modern theater is the moment that the audience realizes, through some telling line or word or gesture, that there is a whole backstory behind the story and things are different than they seem. In that moment, the audience members participate in the art, and become, in a weird and satisfying way, artists themselves.

But in Strange Interlude, O’Neill erases all ambiguity and the possibility of surprise by having his characters voice their innermost thoughts while on stage. These are not soliloquies, done in gorgeous prose and declaimed in a spotlight on an otherwise motionless stage, but the excited utterances of fevered brains, some so short that they could be considered verbal burps. “Certainly no giant intellect,” one character utters, to himself and the audience, as he gives a new character the once-over. “…likeable enough, though.”

Asides like this, of course, cannot be posed in special light or otherwise taken out of the stream of action without adding another 50% to the length of the play. (The movie version did the asides as voice-overs, which had the unfortunate effect of freezing the actors while the asides ran on.) In the Shakespeare Theatre’s honest and clearheaded production, they are part of the river of words which run through the play. In fact, they are said with such naturalistic grace by the gifted cast that it sometimes appears that the asides are part of the dialogue, much of which is in the confessional mode. After a while, the distinction between silent aside and spoken admission becomes less important; the truth will out anyway.

Michael Kahn, in his marvelous series for DC Theatre Scene, observes that O’Neill mistrusted actors to deliver the implications contained in the plays he wrote, and thus imposed copious stage directions which he believed would reinforce his meaning. Certainly, in Strange Interlude the only way a character could fail to deliver O’Neill’s meaning would be to forget his lines. But throughout his career O’Neill understood implication, and used it with powerful effect. Remember, in Long Day’s Journey into Night, when James Tyrone tells his tubercular son Edmund that he will pay for any sanitarium he wishes – “within reason”? Was there any actor, in O’Neill’s time or ours, who could deliver that line without revealing all we needed to know about the relationship between the two men? Would it have been improved if Edmund had turned aside and said, “What a cheap bastard!”?

I see another reason for O’Neill’s use of asides in this oddly affecting play, beyond mistrust of actors and (perhaps) the audience. It is that the story he is telling is so extraordinary – bordering on the preposterous – that no actor could imply the reasons for the events which occur, and no audience would infer them, without the help of the asides.

Consider: Nina Leeds (Francesca Faridany) pines for her beloved fiancé Gordon Shaw, who was killed during the final days of the Great War. Emotionally unmoored a year afterward, she shakes loose a confession from her father (Ted van Griethuysen) that he thwarted her planned marriage to Gordon prior to deployment because he wanted her attention for himself. Then she stalks off to a hospital which ministers to the war wounded in reparation for her failure to have sex with Gordon before he died. (Her loyalty to Gordon is so great that many years later she attempts to write a biography of him, and eventually names her son after him.)

When she returns the next year for her father’s funeral, we discover that her reparation has included vigorous sexual escapades with the war wounded, and the hospital’s alarmed doctor, Ned Darrell (Baylen Thomas), is eager to see her marry the amiable hayseed Sam Evans (Ted Koch) and have a child, which was the traditional prescription for nervous or unhappy women.

The seemingly anesthetized Nina agrees, but once wed, learns a terrible secret from Sam’s mother (Tana Hicken) and thereafter, without any further investigation or analysis, makes several life-changing decisions based on what she heard. She eventually asks Darrell to father her child, which she will pretend is Sam’s; Darrell agrees as a “scientific service.” Tragedy, and life, ensue.

Floating through all these scenes is Charles Marsden (Robert Stanton), an effete mama’s boy and comedy-of-manners novelist whose sexuality has been ostensibly scarred by an experience as a sixteen-year-old in a bordello. (“…feeling I had defiled Mother,” he explains in an aside, “and myself – forever.”). Marsden has, or believes he has, an unrequited passion for Nina, who does not take him seriously, and he manages to ingratiate himself into every scene, reading the newspaper in Sam and Nina’s living room; meeting people in her father’s library, even accompanying Sam and Nina on their honeymoon to Sam’s family home in upstate New York. 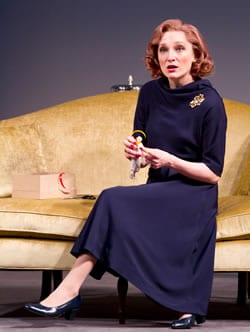 On the evening I watched the production, the audience sat through the first Act riveted and goggle-eyed as these bizarre events unfurled on Walt Spangler’s deliberately claustrophobic set. (A rectangular room, with two walls absent, serves for all nine scenes, the venues distinguished from each other by furniture and fixtures which materialize through mechanical means.) The chuckles began with advent of the first Scene of the second Act, in which the pretense of scientific detachment under which Darrell fathered Nina’s child disappears and the lovers begin – in their asides – to limn their passion. The laughter grew as the clueless busybody Marsden labored to discover what had transpired between Darrell and Nina. By the third Act, which observes Nina’s son as a Darrell-hating child (Jake Land) and as an athletic young adult (Joe Short) who, to Nina’s steaming, scheming rage is in love with a beautiful young woman (Rachel Spencer Hewitt), the room was full of guffaws, deep, rich, pleasured and freely expressed. I laughed, too, though I was familiar with the play, and had read the script.

The laughter, let me make clear, was directed at the characters, who through the skill of the actors and the use of the asides, made their stupefying lack of self-awareness evident. In the play’s closing moments, when Nina makes her final astonishing decision, we find that we have seen something somewhere between a magic act and a miracle, in which twenty-three years of unrelieved self-inflicted calamity for Nina and her companions becomes perfectly clear and understandable.

O’Neill’s prose in this piece is almost feverish, and the emotions of the characters heave back and forth like electrons in the Hadron Collider. To do the lines plausibly, Kahn appears to have elected to adopt an older acting style, more suited to the script than modern naturalism. It works; and it may have been the only choice which would work. Faridany seems to be channeling the young Katherine Hepburn and there is a touch of Cary Grant in Thomas’ Ned Darrell. But it is Stanton as Charles Marsden who really makes the engine of this production run; layering alternate coats of self-loathing and pious self-regard over the red-hot poker of anger which is the character’s core, Stanton’s Marsden emerges as the startling hero of this show, happy and at peace.

I wondered if this was how the play struck audiences back in 1928, when it won the Pulitzer Prize, so I retrieved a contemporary review by Joseph Wood Krutch of the New York Herald Tribune, done on March 11 of that year.

“To be profitable,” he said, “all future discussions of the play must, I think, be concerned only with the nature and extent of its excellence, since it is indisputably excellent to some fashion and to some degree.” And later: “Tragedy, said Aristotle, is the imitation of noble actions, Comedy the imitation of ignoble ones…A tragedy is a work which treats man as though he were noble, a comedy a work which treats him as though he were ignoble, and it is the chief distinction of O’Neill that he was capable of doing the former.”

So could it be that in 1928 Strange Interlude would be tragic and not comic, and that the manipulations of its characters, made transparent by the asides, would seem noble and not ignoble? I wasn’t there, of course, and neither were you, but Krutch was, and he says yes.

And maybe he’s right. 1928 was during the childhood of our collective self-awareness, where the science of personality was pretty much confined to Freud’s now largely discredited theories. (Kahn points out that O’Neill himself was subjected to Freudian psychoanalysis before writing this script). One of DC Theatre Scene’s readers, commenting on a Kahn analysis of this play and production, observed that “We seem fascinated as a culture by that early 20th century period.”

I agree with her. In the broadest sense, we see our own childhood when we look back to that time. It is like looking at some perfervid love letter we wrote in the ninth grade – to the charismatic athlete who once looked at us and smiled (now a used-car salesman in Ypsilanti, Michigan), or to the sloe-eyed, poetry-reading beauty who once asked us the time (now a patent lawyer and the mother of two lumpish teenage boys). It is hilarious, and a little embarrassing, and beautifully, profoundly human.