All’s Well that Ends Well, a reprise of STC’s 2010 production, will be this summer’s Free-For-All offering from Shakespeare Theatre Company.   The production at Sidney Harman Hall will run for 16 performances, August 23 to September 5, 2012.

The  Tony Award-winning Shakespeare Theatre Company announced this week how to get tickets to the free performances.

STC will reserve up to 200 free tickets for patrons who appear at the Harman Hall box office the day before the desired performance. The box office will be open from noon to 8 p.m. The limit is 2 per person. 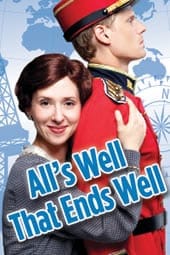 2012-2013 season ticket-holders and members of Friends of Free For All  can order their free seats in advance. you can become a member for  a tax-deductible contribution starting at $200.

All’s Well that Ends Well is a story about Helena, the daughter of a physician who, using techniques she learned at the knee of her father, saves the desperately ill King of France. He promises her anything she wishes in return, and she asks for the hand of Count Bertram, who would rather gargle with razor blades than marry Helena.

Details for this year’s Free-For-All