Composer and conductor Marvin Hamlisch is profiled in the newest episode of the PBS series American Masters.  Marvin Hamlisch: What He Did For Love premieres tonight, Friday, December 27, 2013, 9 -10:30 p.m. ET on PBS, with new interviews his family, Barbra Streisand, Quincy Jones, Woody Allen, John Lithgow, Lucie Arnaz, Ann-Margret, and many others. 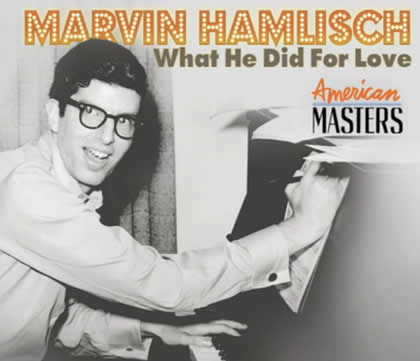 Marvin Hamlisch had a storied career in the worlds of music, theatre, and film.  He was a musical prodigy who was accepted to Julliard at the age of six, but whose tastes ran more to popular music and entertainment.

He composed the score for Broadway musicals such as A Chorus Line (written when he was only 22) and They’re Playing Our Song (loosely based upon his romance with songwriter Carole Bayer Sager).

Among the over forty films he scored were The Way We Were (which provided Barbra Streisand with a hit single of the title song that he co-wrote), The Sting (in which he adapted the music of Scott Joplin and made a popular hit out of the instrumental “The Entertainer”), Ordinary People, Sophie’s Choice, the James Bond film The Spy Who Loved Me (which yielded another hit single, “Nobody Does It Better” sung by Carly Simon), and one of his final projects, the score for the  award-winning HBO biopic of Liberace, Behind the Candelabra.

He was a popular conductor who served as musical director for concerts, tours, and TV specials starring such singers as Barbra Streisand, Liza Minnelli, and Linda Ronstadt.  He also served as Principal Pops Conductor for several major orchestras, including DC’s National Symphony Orchestra.

Fans of the NSO Pops series were treated both to outstanding music and some of his humorous stories. He spoke of his childhood growing up in New York City with friends like Liza Minnelli, which led to an informal performance before her mother Judy Garland.  He would talk of schlepping visiting artists out to Bethesda for his favorite pizza.

Once Hamlisch was about to conduct the orchestra in performing a work by John Williams (composer of music for films such as Star Wars, ET, Jaws, Raiders of the Lost Ark, Jurassic Park, Shindler’s List, and many others).  In mock jealousy he said something like “You wanna know about John Williams?  Here’s John Williams.”  He then sat on several piano keys, making a discordant sound, and then imitated fans by saying “Oh, that’s brilliant, Mr. Williams. Here, have another Oscar.”

Hamlisch was beloved in the entertainment world and the American Masters episode features many famous stars from theatre and film.  It also includes some rare footage of Hamlisch appearing on talk shows in his younger days when he was a famous personality (for younger readers, that’s like being a realityTV  star only with exceptional talent and wit as well).

Viewers at an advance screening in New York City praised the documentary.  While it celebrates Hamlisch’s successes, it also includes mention of less successful projects (such as scoring musicals like Jean Seberg, Smile, and The Goodbye Girl).  At times, Hamlisch felt pressure to match his earlier successes and wondered if the public had passed by his style of music.  He may have wondered, but he never stopped working, and one of his last projects was writing the score for a musical version of The Nutty Professor.

Hamlisch died unexpectedly in the summer of 2012 at the age of 68 after a brief illness.  A memorial service in New York City on September 18, 2012 drew a who’s who of musical and theatrical stars and included performances by Barbra Streisand, Liza Minnelli, and Aretha Franklin, among others.

Check your local listings for channels and times for PBS showings of the American Masters episode Marvin Hamlisch:  What He Did For Love.