Last year, beyond anyone’s wildest expectations, NBC’s broadcast of The Sound of Music Live!, starring Carrie Underwood, managed to shatter ratings records and break the Internet in ways Kim Kardashian could only dream. (For my complete thoughts on both the broadcast and the social media firestorm, click here.) 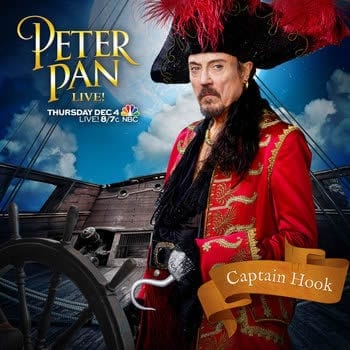 What do you do when something makes you money? Obviously, you do it again. And so tonight, with a “try, try again” attitude encouraged even by some fervent detractors, NBC will be airing Peter Pan Live!, at 8pm.

Leading the star-studded cast are venerated movie weirdo (and former Broadway hoofer) Christopher Walken as Captain Hook and Allison Williams, of HBO’s Girls, as the titular boy who won’t grow up.

Broadway veterans Kelli O’Hara and Christian Borle are also along for the ride, as Mrs. Darling and Mr. Darling/Smee, respectively. Taylor Louderman plays Wendy, Alanna Saunders is Tiger Lily. Tinker Bell will be a special effect, and Nana will be a real dog named Bowdie, and not a man in a suit.

Rest assured, friends and fans, that I will be sharing my complete thoughts once again this year, following whatever social media firestorm may arise.

Once again I’m going in with hope and optimism. Williams and Walken certainly are.

I advise we all do.

In the words of Pan himself: “Think happy thoughts!”