A roundup of some of this week’s theatrical news and notes from Center Stage, Theatre Lab, Studio Theatre, The Kennedy Center and Studio 2ndStage. 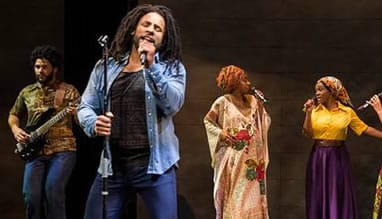 Baltimore’s Center Stage knew the world premiere production of Marley would attract a big audience, but no one had any idea just how popular it would be. The musical, based on the music of legendary Reggae star Bob Marley, was written and directed by Kwame Kwei-Armah, Center Stage’s artistic director, and became the highest grossing single ticket show and the highest attended show in the 52-year history of the theater.

“We saw a huge increase in attendance and ticket sales with this spectacular show,” Stephen Richard, Center Stage’s managing director, says. “We knew Marley was going to be successful, but we were elated with the universally positive feedback from patrons and overwhelming clamor to get tickets to see this production.”

During its run—May 8 through June 14—Marley earned nearly 50 percent more than the previous highest grossing single ticket show in Center Stage’s history, the 2011 production of The Wiz.

The Theatre Lab’s award-winning Musical Theatre Institute for Teens will kick off with a performance of Pacific Overtures (music and lyrics by Stephen Sondheim, book by John Weidman, additional material by Hugh Wheeler) on July 9.

“Our Musical Theatre Institute takes on projects that kids usually don’t get to approach in high school, and they’re asked to attack them like professionals,” says Buzz Mauro, co-executive director of The Theatre Lab, and music director for the production of Pacific Overtures. “We teach them what that means, of course, and it’s great to see them rise to the occasion. Some of the best young musical theater performers in the area come out for it, but we get plenty of beginners, too, and our emphasis is on working with the ensemble. In addition to being the best training we can offer to the whole group, the end product always shows that this is a good way to come up with the best performance, as well.”

Pacific Overtures was chosen this year because Mauro had done it in graduate school, and has always loved it. The show explores a wide-range of Japan’s introduction to western civilization, told in multiple styles, from Kabuki theatre to modern realism. The tale ranges from Commodore Matthew Perry’s arrival in Japan in 1853, through times of war, to more contemporary times as Japan welcomes titans of Western business.

“It’s extremely unusual, incorporating aspects of Kabuki and an almost Brechtian kind of storytelling, with Japanese influences in the music, but plenty of good old Sondheim difficulty, complexity, excitement and beauty,” he says. “Audiences approaching it for the first time never know what to expect, but it turns out to be a wonderfully satisfying theatrical experience. I think the kids were a bit skeptical at first, because they didn’t know the show, but they certainly seem to love working on it. And there are tons of parts, so everybody gets a standout moment.” 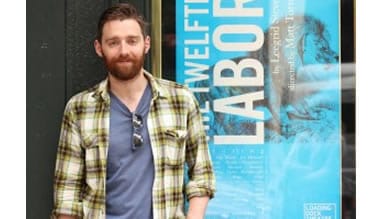 Matt Torney is joining Studio Theatre as its new associate artistic director beginning this month. Torney’s responsibilities include managing the theater’s day-to-day artistic operations, including casting and scouting artistic personnel; directing select productions in the Main Series and Studio X; and helping to oversee the programming and production of Studio X, Studio’s series of new plays and innovative projects.

“With one foot in Ireland, and another in the United States, Matt brings a unique mix of experience and contacts to his work at Studio,” David Muse, Studio’s artistic director, says. “I met many exciting candidates over the course of this search; Matt stood out as a director of vision and rigor, with an institutional background in both the US and Ireland and a passion for creating environments where artists can thrive.”

Previously, Torney served as the director of programming for Origin Theatre, an Off Broadway theatre company that produces new European plays and special events, including Origin’s First Irish, a theatre festival dedicated to new Irish work. He also serves as associate director of the Rough Magic Theatre Company, one of Ireland’s top independent theater companies.

More than 50 playwrights, directors, and dramaturgs will head to The Kennedy Center July 25-Aug. 2 to take part in the 10th annual weeklong MFA Playwrights’ Workshop.

A committee of NNPN Core Members selected six plays out of 93 nominated playwrights from across the nation and the selected works include plays by Matthew Capodicasa, Lindsey Ferrentino, Dominic Finocchiaro, Sylvia Khoury, Will Snider, and Aurin Squire.

Additionally, the workshop will feature the fourth annual New Play Dramaturgy Intensive, led by Mark Bly, and a Directing Intensive focusing on developing new work, led by Michael Rau and Will Davis.

Fans of Silence of the Lambs can see Clarice, Hannibal and Buffalo Bill as never before, when Studio Theatre presents Silence! The Musical, a spoof of the 1991 Oscar-winning film, from July 15-Aug. 9.

Laura Jordan will play Clarice Starling, a role she previously played in the Off Broadway run of the show. She has performed on Broadway in Cry Baby and In My Life.

Tally Sessions takes on the role of the infamous cannibal. Sessions has performed on Broadway in Big Fish and The House of Blue Leaves, and has been in touring productions of South Pacific, Legally Blonde, and Dirty Rotten Scoundrels.

Directed by Alan Paul, with music and lyrics by Jon and Al Kaplan and a book by Hunter Bell, the all singing, all dancing production features gleefully vulgar songs, non-stop zingers, and a singing chorus of tap-dancing lambs.