Oropesa is back for WNO’s The Daughter of the Regiment, in which she plays  Marie, a young woman whose father was killed in battle when she was a child and who has been raised by his comrades-in-arms. She falls in (forbidden) love with the strapping young peasant Tonio (alternately played by Lawrence Brownlee and Juan Jose De Leon), but she is targeted for an arranged marriage. On some nights, Andriana Churchman will play Marie. Robert Longbottom directs. November 12 – 20.

The Washington National Opera kicks off the new year with a new hour-long opera, The Dictator’s Wife.  The biting Mohammed Fairouz/Mohammed Hanif première tells the story of the wife of a local tyrant who prepares to defend the atrocities committed by her husband, tries to hide in the bathroom. January 13 to the 15th.

Major American playwright and opera buff Terrence McNally (you’ll remember his trio of operas, Nights at the Opera presented there in 2010) returns to The Kennedy Center.  Next year, he pairs with Jake Heggie for Dead Man Walking, an opera inspired by the Tim Robbins film of the same name. Joseph De Rocher has been convicted of a double murder which he swears he didn’t commit. He calls on Sister Jean Prejean, a notable opponent of capital punishment, to help him with his final appeal. She does so, but her experiences change them both. Directed by Francesca Zambello with Kate Lindsay as Sister Jean and Michael Mayes as De Rocher. From February 28 to March 11. 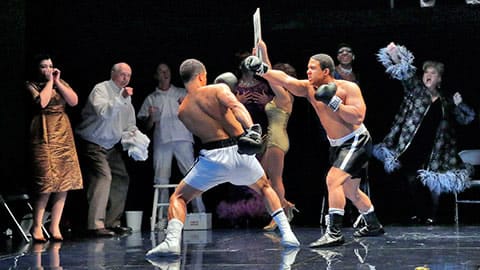 Count on a fight breaking out in the Opera House next year. It will in Champion, Terrence Blanchard and Michael Cristofer’s opera about the 1962 Madison Square Garden boxing match between Emile Griffith and Benny Parat. Parat, who had split two welterweight fights with Griffith, accused Griffith of being a homosexual during the weigh-in for their third fight. Griffith responded in the twelfth round of the fight by holding Parat upright as he methodically beat him; Parat later died. There is a consequence. Directed by James Robinson with Arthur Woodley as Griffith (Aubrey Allicock plays him as a young man) andVictor Ryan Robertson as Parat. From March 4 to 18, 2017

WNO ends the season with Puccini’s beloved Madame Butterfly about an American naval officer who has embraced a fragile Japanese woman as his bride.  But there are wheels within wheels, and the officer has ulterior motives. Directed by Leslie Swackhamer with Brian Jagde and Dimitri Pittas as the naval officer and Ermonela Jaho and Hei-Kyung Hong as Madame Butterfly, this opera runs between May 6 and 21, 2017.