“Okay, explain your play to me.”

It’s Fringe preview night, I’m drinking at the bar, and this is the third time in an hour I’ve been asked this question. Since we showed our sneak peek to a packed house, It Will All Make Sense in the Morning, has been renamed by the audience into That Creepy One with Blood and Eggs. Which isn’t a bad title, actually.

Being hounded by intrigued audience members is a good problem to have. But each time I’m asked about the show I find myself giving a different answer.

“Explain your play to me”

It’s a supernatural drama about nightmares.

When Sparrow was a little girl she was haunted by nightmares before being rescued by Alistair, who trapped them in a glass mason jar and buried them beneath a tree. Now all grown up and fighting his own demons, Alistair has no memory of any of it. But the nightmares have returned. And they want Sparrow back.

It’s an extended metaphor on depression, trauma, and chronic illness.

Sparrow is plagued by something that no one else can see or experience. Everyone around her – her girlfriend, her family, her doctors, her best friend – all wrestle with how to help and how much. If you’ve ever had an invisible burden you couldn’t carry on your own or had to watch a loved one struggle with something you couldn’t fix, this play is for you.

It’s not at all what you expect from the people who brought you last year’s #sexts.

#sexts was a huge hit, easily the most popular thing the Coil Project has ever done. We nearly sold out the entire run, and were featured in the first ever Fringe extension week. It was a raunchy comedy about technology, with a big cast, and a quick, memorable title.

All of these answers are true, of course. But they’re glib. Elevator pitches. My spiel to get you to plunk down your cash. You deserve something more sophisticated than that.

It’s everything The Coil Project is about.

But most of all it’s stories about what it means to be a chosen family told by the family I’ve chosen to make art with for the last three years. And if that art stands up then it is irreducible to an elevator pitch. It is strange, and magical, and funny, and personal, and universal.

Come see it and find out. 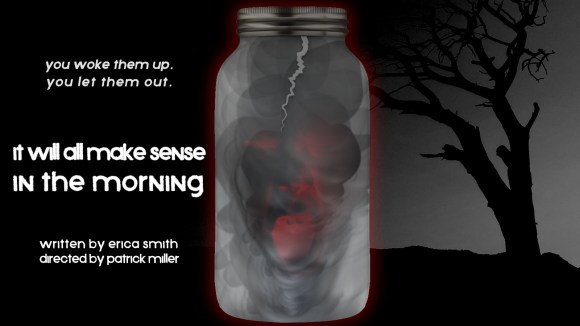 Erik Harrison is an actor, Artistic Director for The Coil Project, and producer of It Will All Make Sense in the Morning.