We’ve looked back at some fun facts from 2016. We’ve announced the best theatre videos, and revealed our most memorable plays and stage moments. But enough about us. DCTS readership is approaching 1.3 million for this year, so let’s take a look at which posts, from all those million plus views, were our readers’ favorites.

Shakespeare’s Greatest Speeches . In 2010, Tim Treanor proclaimed that the greatest Shakespearean monologue was  St. Crispin’s Day from Henry V. We asked a panel of experts – Jenn Larsen, Chris Henley, Gail Kern Paster, Akiva Fox, Cam Magee and Tim himself  – for their top choices, then turned it over to our readers to choose. Read their choices and hear the winning selection.

We thought it would be fun to give today’s readers a chance to weigh in, so we’ve re-created the poll:
Vote for William Shakespeare’s Greatest Speeches. 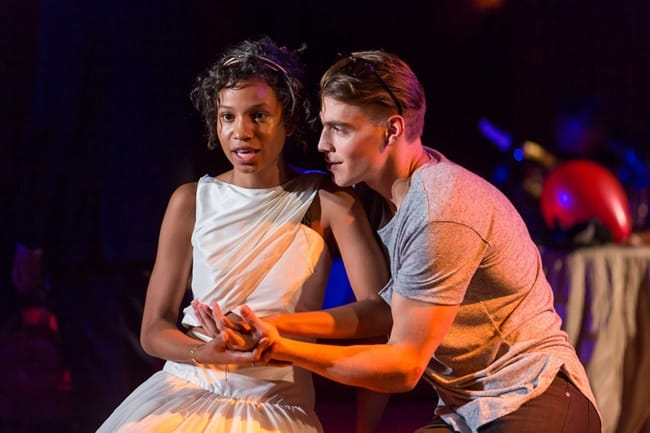 One of the reasons readers turn to DCTS every day is to read the latest reviews. These reviews garnered thousands of readers:

Second City’s Almost Accurate Guide to America. Kelly McCorkendale noted that Chicago’s Second City gave us a chance to “rethink your prejudices and priorities.Thank the Milky Way we’ve got the stellar Second City (and other current comedy giants) to make us laugh at ourselves.”

Romeo and Juliet, Shakespeare Theatre Company Jeff Walker raved: “The passion, the romance, the inevitable tragedy – all wrapped in Shakespeare’s delicious verse – gains an immediacy under Paul’s fresh approach to the tale of the most famous lovers in our western literature and drama.”

Moby Dick, Arena Stage  Reviewing this in December, Tim Treanor proclaimed of Lookingglass Theatre’s production: “This may be the best thing you’ll see in theater all year.”

We’re very appreciative of our chance to have conversations with theatre artists. Here were your favorites from 2016.

Stephen Sondheim talks about Road Show. When Signature Theatre produced Road Show, one of Sondheim’s most re-worked musicals, we had the chance to talk with the great musicals giant, thanks to Mark Horowitz.

Simon Helberg in Florence Foster Jenkins.  Critics, including ours, generally agreed that Simon Helberg as Cosmé McMoon nearly stole the show from Meryl Street in the film adaptation of the play Souvenir: A Fantasia on the Life of Florence Foster Jenkins, seen here at Studio Theatre and 1st Stage, with Nancy Robinette and Lee Mikeska Gardner, respectively, in the lead roll. Dante Atkins spoke with the actor, best known for his role on the TV hit comedy, Big Bang Theory.

Oliver Thornton: What Taming of the Shrew has to say about love. Lorraine Treanor had the chance to speak with this actor, normally at home on London’s West End. He played Bianca in Shakespeare Theatre Company’s all-male cast.

Theatre Artists – a liveable wage. What performers earn and should earn, a conversation started in 2014, was still viewed by many this year. Written in 2014 by Andrew F. Griffin, this topic continued to be top of mind for visitors from many theatre communities this year, and will likely continue as theatreWashington gives it additional thought in 2017.

We were thrilled that so many viewed our live coverage of Jill Kyle-Keith reporting Backstage at the Helen Hayes Awards with videographer Sharon Crissinger.

Our contribution to fake news (that’s what they now call our traditional post on April 1):
Trump Buys Naming Rights to the Kennedy Center

Hamilton is coming to the Kennedy Center  in 2018.

And, finally, this year we reported the loss of members of our community: