Synetic Theater, a DC area company known nationwide for its movement-based productions, will be taking a two-toned approach to its 2017-2018 season. The 2017 portion will be full of light-dappled, kid-friendly stories. Things get dark quick in 2018, though. 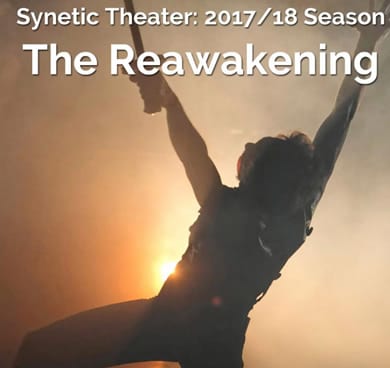 Synetic will kick off its season with The Adventures of Peter Pan, the little boy who never grows up. Pan leads his worthies — including a troupe of young English siblings, recently emigrated to Neverland — against the infamous Captain Hook and his fellow pirates. Synetic recommends this show, which runs from October 18 to November 19, 2017, for those seven and up.

After a brief respite to vacuum up the pixie dust, Hansel and Gretel will appear at the Synetic Family Theater in all their breadcrumb-spreading glory. Their mission in this wordless production: to outsmart a witch and, if possible, eat her house. This production, which will run from December 1 to 23 of this year, is designed for folks of all ages, except witches.

It will be a lot more difficult to outsmart the judicial system in Kafka’s The Trial, which will start the 2018 part of the season for Synetic. K, for no discernable reason, has been arrested, charged with a crime no one can describe and subjected to a judicial procedure no one can understand. (This is not a commentary on our current immigration system. Kafka wrote this in 1915.) From January 17 to February 18, 2018; Synetic represents this for those 14 and up.

And, for those of you who think The Trial insufficiently scary, there will be Shakespeare’s bloodiest (by a lot) play, Titus Andronicus. Titus, a great and honorable leader, is betrayed and humiliated by the tyrant who assumes the throne, and so Titus cooks up — cooks is the operative word here — a horrific revenge. This will be the 13th in Synetic’s line of Silent Shakespeares, and will run from April 25 to May 27 of next year.

In summer of 2018, Synetic will be trying something new: an original adaptation of The Wonderful Wizard of Oz. We’ll hear more about this launch production of the Synetic New Voice Series as we approach the show dates (July 11 — August 12, 2018).