Lorraine Hansberry’s groundbreaking portrayal of a black working-class family and its “dream deferred” in mid-20th century America maintains its timeless grace in a new revival at Arena Stage, but disappointingly, many of the performances don’t fulfill their roles’ potential.

A Raisin in the Sun, first produced in 1959, tells the story of the Younger family and their attempts to improve their station while maintaining their dignity, a design disrupted by the advent of a windfall of money which ultimately carries them from their cramped, South Side Chicago apartment to the all-white Clybourne Park, and a more-profoundly troubling challenge. Notably, aspects of the classic drama come from Hansberry’s own experience as a child in the 1930s, when her father moved the family into what she described as a “hellishly hostile white neighborhood” and was a litigant in a legal battle around racial restrictions in real estate that was contested up to the U.S. Supreme Court in 1940.

A Raisin in the Sun is about people finding the strength to carry on, day in and day out, endowing vibrancy to struggle.

The lights open on a nearly universal scene—Ruth (Dawn Ursula), wife and mother, shuffles through the family’s small home before anyone else is awake, preparing the day for those she cares for: making breakfast, setting out clothes, motivating her men to go out into an often painfully indifferent world—to school, to work—with a smile on their face and a glow in their breast.

But a wife’s love and affection is not enough for her hard-working husband Walter Lee (Will Cobbs). Neither is his stultifying job as a chauffeur to rich men. The opportunity to break out of his daily drudgery sparks a fire in him, setting up a multigenerational clash which challenges the family’s values and cohesion.

The plot goes through its pivotal, well-structured turns, leading the audience through the family’s gains and losses, including the best-remembered and most discomfiting scene of the play and the 1961 film—when the lone white character Karl Lindner (Thomas Adrian Simpson), from the Clybourne Park Improvement Association knocks on the Youngers’ door.

The lead characters in Raisin fiercely hold to their dreams. Walter Lee, the locomotive of the action, is a frustrated everyman mixed up with exasperation and animosity, who belittles his wife yet desperately wishes to provide for her. He dreams of transplanting Ruth and his young son into an easier, more comfortable world in which wealth is plentiful and anything desired is at hand for the taking.

For her part, Ruth dreams of romantic and domestic bliss, ample opportunity for her son and more living space for her growing family. Walter’s sister Beneatha (Joy Jones), a stand-in for Hansberry herself, yearns to heal all of humanity; she dreams out ahead of her time, to a point when racial justice is the norm and women can express themselves with unmitigated honesty.

And then there’s Lena (Lizan Mitchell), the matriarch and minister to three generations, who tends to the dream of her late husband, that their children and grandchildren should enjoy the fruits of honest labor and endure less hardship than those who came before. 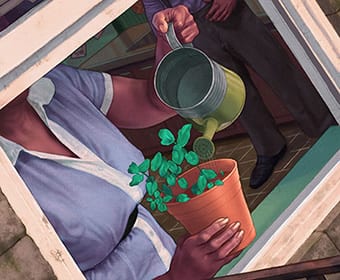 A Raisin in the Sun

Regrettably, with the exception of Mitchell’s commanding presence, the performances don’t rise to the power of the material. Cobbs is acceptable in the key role of Walter Lee, but is missing that last 10-20 percent of muscle that enlivens the role with passionate awe. It’s a volcano of a role, one of the truly memorable parts in modern theater, in which the audience should feel every fuming silence as combustible, every sob as soul-wracking and every eruption as frightening. These turns were all present in Cobbs’ measured portrayal, but in sorely lacking quantity. Put another way, you can see the performer acting. He’s better in lighter areas, when Walter Lee drunkenly dances to Beneatha’s African records or when he cheekily sidles up to his wife in a moment of ardor.

Similarly, both Ursula and Jones come up short in their portrayals of the long-suffering Ruth and the flippantly precocious Beneatha. Ruth’s weariness is not really felt, but expressed by Ursula as acting, who tended to a somewhat erratic performance, swiveling between emotional scales. And while Beneatha’s story is meant to offer comic relief from the main narrative, she comes off a little too foolish in this production.

Mitchell alone delivers a consummate performance. From start to finish, whether treading lightly over humorous notes or discharging convulsive emotion, Mitchell is a triumph to watch. She imbues Mama Younger with that fire of spirit and genuine magnetism that Cobb’s portrayal lamentably lacks.

Hansberry’s play is an enduring classic because it’s so well put together and the characters wholly evoke our empathy. When it’s performed at the peak of its promise, the audience helplessly gives in. But for it to really work, the highs from prevailing over adversity and the lows of battling the omnipresent fight must be bone-achingly believable. Overall, this production falls short.

Roy Maurer, a former U.S. Marine and filmmaker/screenwriter, switched to
journalism in 2003. He has covered theatre in Los Angeles, Bloomington, Indiana,(where he co-founded a weekly arts publication and added political reporting to his roster) and here in DC for NBC Washington. He has been an editor/reporter covering
labor and immigration law and policy since 2008.