You have likely encountered Doubt: A Parable before. Whether it be through the Tony Award-winning original Broadway production, the Pulitzer Prize-winning script, the Academy Award-nominated film or the multitude of well-received regional productions (including several in the DC Metro area), John Patrick Shanley’s meditation on the power of doubt vs. conviction has been in the collective consciousness of American culture for over a decade. So why revisit it now?

Quotidian Theatre Company’s production proves that Doubt is as thought-provoking and current now as it was when it was first produced.

At the center of Doubt is one simple conflict with no simple answers. Sister Aloysius Beauvier is the doctrinaire, disciplinarian principal of a parochial school in the Bronx in 1964, which has just admitted its first African American student, Donald Muller. Sister James, who is the picture of an idealistic young teacher, notices that Donald has alcohol on his breath and is acting oddly after having a one-on-one meeting with the young and charming Father Flynn, leading Sister Aloysius to believe that Father Flynn is making sexual advances towards Donald. She embarks on a campaign to remove Father Flynn from her school.

But is he really guilty? When there is a lack of hard evidence, who do you believe? The unlikeable, authoritarian, conservative old woman, or the warm, charismatic, progressive young man? Is Sister Aloysius right, or does she just dislike Father Flynn and his modern, casual manner?

In 90 blazing-fast minutes, Shanley takes you on a journey of …  well … doubt. He explores the complexity and nuance in the shades of gray of this seemingly black and white dilemma. The brilliance of this script, is that every time you think you’ve found your footing, every time you think you know which side you are on, some new information is revealed that throws you off balance again.

Doubt was first produced in 2004, not long after the Spotlight team at the Boston Globe published its investigative report on the pattern of sexual abuse perpetrated by Catholic priests in Boston. For me, Shanley was asking the question on many minds: how could this have happened?

Doubt explores the courage required, at great personal expense, to stand up against something you know in your heart to be true but cannot prove. Isn’t it much more comfortable to just believe there was no wrongdoing when an easy explanation is available to you? Isn’t it better to believe the best of people? To believe in the system that is already in place? As Sister Aloysius says “If I could, Sister James, I would certainly choose to live in innocence.  But innocence can only be wisdom in a world without evil.”

Revisiting the script in the current political environment, it becomes all the more about the layers of systems in place that protect the status quo. As a woman in a patriarchal and highly hierarchical system, Sister Aloysius is working with one hand tied behind her back. She cannot report her suspicions to the monsignor, as protocol dictates, because she knows he will not believe her over Father Flynn who, as a priest and a man, has authority over her. Instead, she has to resort to lies and pretenses in her attempt to remove Father Flynn from the school. As she says to Sister James “In the pursuit of wrongdoing, one steps away from God. Of course there’s a price.” 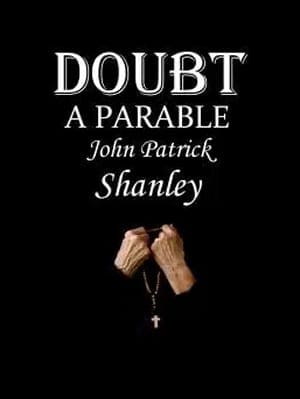 Even more limited in her options is Mrs. Muller, the mother of the boy in question who, in the most powerful scene of the play, is summoned to meet with Sister Aloysius. The shattering conversation that ensues is about the choices Muller must make to navigate a world in which she has no privilege.  Kecia Campbell as Mrs. Muller plays the scene with a mix of deference, steely resolve and heartbreak.

The production plays out on a simple but serviceable set (by Colin Dieck), with costumes (Kecia Campbell and Stephanie Mumford) and lighting design to match. The simplicity of the design allow the events of play to unfold realistically and the writing and acting to shine. And, it does. As Sister Aloysius, Stephanie Mumford squeezes every bit of humor out of the script giving the unlikable nun a certain amount of likeability. It is a complex role, and Mumford manages to find a number of shades to the character.

Elliot Kashner’s Father Flynn is an excellent foil to the Sister. While she is brusque, he is charming and affable. She is doctrinaire but willing to buck church protocol in order to do what she believes is right, while Flynn is progressive but willing to use church protocol to maintain status quo. Sister Aloysius has a cutting, steely exterior that hides a deep vulnerability, Flynn seems open on the outside but hides a self-righteous anger. As the third point in this triangle, Sister James, Chelsea Mayo is the archetypical innocent young woman. Though her performance is affecting, it lacks the level of nuance displayed by her co-stars.

Shanley was inspired to write this play because of the contentiousness in the discourse of the time. As he says in the preface to the 2005 publication of the play, “We are living in a culture of extreme advocacy, of confrontation, of judgment and of verdict. Discussion has given way to debate. Communication has become a contest of wills.” If anything, these words are even more true today. Ultimately, I think Shanley is challenging us to sit with doubt, in all of its discomfort because if we hang on too tightly to our convictions we leave no room to really talk and listen to each other, and no room for growth or change.

Amy Couchoud is a director, teaching artist and producer who has been active in the DC performing arts community since 2000. A Capital Fringe Festival veteran, Amy's work as a director includes former Fringe favorites Chocolate Jesus, The Sin Show and Logic, Luck and Love. She was the co-creator and director of E-geaux (beta), a mash-up of mobile technology and theatre which was featured on NPR's All Tech Considered. Amy has worked with Story District as a director, faculty member and producer of the annual Story District's Top Shelf since 2007. She holds a degree in Dramatic Arts from St. Mary's College of Maryland.