It was as if an electric current connected the cabaret performers who call themselves Diana V. Sáez & Friends.

Staged on a platform surrounded by round cafe tables, draped with red table cloths, this In Series cabaret concert at Atlas’s Lab II shines the spotlight on Hispanic songs of the past. Some are rarely heard protest songs from the underground; some are famous boleros, love songs of romance. All are passionately performed, and often laid  back, understated, easy to listen to, and well-worth the price of admission.

Pável Urkiza, from Cuba, is a guitarist and song writer. Pianist Suzzette Ortiz, from Puerto Rico, breathes in sweet-and-sour bellow-sounds from her accordion; and local percussionist Leo Alvarez who hand-slaps the cajon and a vast array of bomba drums, complete the chamber orchestra. Diana Sáez, founder of the chamber choir, Cantigas, is a well-known specialist in Latin American choral music. She sits, serene and leads off with the vocals. She has chosen some rare selections, not often heard by English speakers.

First came the haunting movie music by James Horner (USA) for The 33, about the dramatic story of the mining disaster in August 2010 that drew international media attention. A mine collapsed in Copiapo, Chile, and 33 miners found themselves trapped 2,000 feet below the ground. The workers got a message to the top, attached to a drill bit. The note, written in bold red letters read “We 33 are OK in the shelter.” Chile then led an international team, including support from the NASA space agency, and 69 days later the miners were rescued. Their survival story is immortalized in The 33.

Sáez uses the quote “We 33 are OK in the shelter,” as a unifying theme and tribute to the miners’ resolve to live. It is flashed on an upstage screen, along with images of the surrounding desert. An instrumental arrangement of open-vowel singing from Sáez, Urkiza, Ortiz, and Alvarez, in a minor key, is spine-tingling.

This style of Latin American theatre is called “café-teatro,” where Latin-Américan and Spanish songs rooted in folk music are performed. The protest songs with a message represent the struggle for freedom and social justice throughout South America. Songs performed by Joan Baez during the 1960s and 70s represent the North American equivalent.

In what became known as The New Song Movement in Latin America, Latino musicians combed the back-country villages for original folk music. Similarly, in the 1930s, Federico Garcia Lorca followed the same calling for cultural identity. In the 1950s and 60s, somewhat the same quest was met with fierce political resistance from militaristic governments, specifically in Argentina and Chili and some song writers became martyrs. 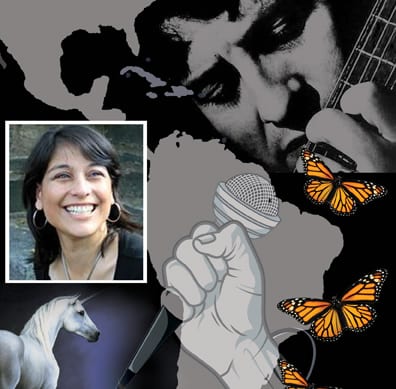 Protest against poverty takes over in “Puerto-Rican Lament? Lamento Borincano,” by Rafael Hernández. Borincano is the indigenous word for native Puerto Rican islander. The impoverished jibarito (fried plantain) peasant hopes to find income by selling his plantain sandwiches in the city. Instead, the poor salesman is devastated when he finds economic inequalities and “horrible living conditions” in the deserted city, filled with needy, hungry people. He leaves us with the question: “What will happen to Puerto Rico, to Borincano? What will happen to my children and my home?” The percussionist, Leo Alvarez, introduces us to a new musical instrument, the Palo de lluvia (a hollowed-out stick, filled with seeds, that rasps like rain when rattled) that adds a surreal dimension.

Then there is the memorable “My Only Possession/Lo único que tengo,” by Victor Jara from Chili. The vocalist sings about “My hands are my only possession,” there is no home or place for him on earth. This song turns into a protest song against repression, when we realize that Jara, the song writer, was a political activist Chilean, who was “imprisoned, tortured and killed.” (As revealed in the program notes by Diana Sáez.) Victor Jara lost his life for his art, his protest. The screen images of hands, one picture of a prayer gesture; another picture of open hands, made powerful statements during this piece.

Another song of resistance is more camouflaged. It is the beautifully melodic, “Thanks to Life”/Gracias a la Vida, by Chilean Violeta Parra, performed here straight-ahead by Diana Sáez.. “Thank you to life for motivating my feet to keep going…..Thank you to life for language so I can think and speak.” This song expresses the desire to speak out against the social injustices, part of the New Song Movement/La Nueva Canción, echoing back to the 60s and 70s, the decades of militaristic governments, when people disappeared from the streets for political opposition.

Mediterráneo by Joan Manuel Serrat and Antonio Machado, from Spain was a highpoint. The song that starts out with the lyric, “Because my childhood still plays on your beach….” reflects back to the Catalonian protest against General Franco’s government. Here the song commemorates a place so beautiful, the poet wants to be buried overlooking the Mediterranean Sea. Sadly, during Serrat’s lifetime, he was forced to seek exile from Spain. Still, there’s poetic revenge: the song lives on and when performed last Sunday afternoon, Mediterráneo, really an allegorical poem to innocence, elicited bravos from the audience.

The company performed on the native folk instruments, such as the quena or Andean flute, piped by pianist Suzzette Ortiz, who sometimes played her accordion instead of the piano.  Hearing the charango, which seemed to me to be a South American ukulele, played with the rapid fire fingers by Pável Urkiza was thrilling. Leo Alvarez kept the beat by caressing the cajon,, the hollow-sounding drum, invented by Peruvian slaves from boxing crates on the wharf.

After the last number, and another reminder from the screen projection “We 33 are OK in the shelter,” we were all clapping out the rhythm to the last song, Land/Tierra, written by Pável Urkiza, from Cuba, one of the live stage performers, also a composer who wrote: “Cloud passing by where impossible dreams travel, you will always have my protection/Land of flowers and smiles, of love and plenty, of hugs from everyone. Mother Land.” And I thought of the United States offering hope for freedom from starvation and for free expression of cultural identity.

What’s most impressive in Passion & Struggle is the range of songs. Each song from different South American countries is so different in style. Each has a different message. These are the artists, the poets and song writers and singers who bravely defy, l and sometimes lose their lives, to express and preserve our history and struggles. There’s only one more weekend. Don’t miss this lovely concert of intense music, that will linger in your memory forever.