A wordless production of The Hunchback of Notre Dame makes plenty of sense: Quasimodo has literally gone deaf from ringing the bells of Notre Dame. And on a deeper level, the primal forces at work in Victor Hugo’s story are well served by Synetic Theater’s masterful movement. In their hands, Hugo’s story is thrilling, heartbreaking, and visceral.

While perfectly aligned with his priestly duties, Fletcher’s Frollo glides across the stage as if by an angel’s wings and not on human feet at all, while Quasimodo (Vato Tsikurishvili) lurches behind. Vato’s reverence as Quasimodo makes clear the deep bond between the two, which Weinberger corrupts so painfully.

Esmeralda’s beauty and compassion draws the attention of both Quasimodo and Frollo, and Gringoire & Phoebus too. As Esmeralda, Irina Kavsadze delivers on Esmeralda’s charming lightness. Her carefree twirls that billow out her colorful dress become a leitmotif for everything the rigid Frollo is not. It’s chilling when Esmeralda’s twirling returns while she’s unconscious in Quasimodo’s arms and her billowing dress is replaced with thick ropes that wrap ever tighter around them both. The show is filled with stage pictures just as moving.

And with a theatre company that’s all about movement, even the set moves! Scenic designer Anastasia Rurikova Simes has built almost mountainous walls of organ pipes to represent a truly imposing Notre Dame, along with a tremendous cross. But every piece weightlessly slides across the stage as the setting transforms.

In one of Frollo’s temptation fantasies, the cross dances with him, retreating and lunging like an animal. The mountains of pipes turn and become the wooden scaffolding of lower class Paris, once with a surprise Quasimodo hanging from it ready to leap on an enemy.

Ironically, the set pieces might be the least physically reliable performer. During one scene, the force of the combat on top of the Notre Dame made the set piece shift an inch or so with every swing.

Aside from the set, everyone is steady as a rock as they perform astoundingly complex and energetic dances and fights. The ensemble repeatedly leaps off the set from improbable heights and dash into the fray, where fellow actors can become weapons.[ezcol_1third]
——– 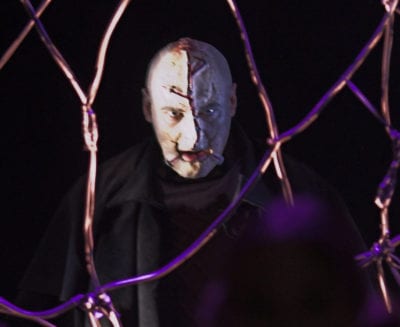 The Hunchback of Notre Dame

Robert Bowen Smith’s Gringoire gets a delightful, comedic fight over his prized flute; at least, until the ensemble tries to hang him. Hard to imagine this shares its plot with a Disney movie.

Konstantine Lortkipanidze’s action scores blend well into both quiet romance and the show’s action, save for the rare Inception-like blaring bass.

While the ensemble’s roles as townspeople, guards, and bandits somewhat blend together, Synetic Theater adds a fourth, unique faction to this production: Notre Dame’s gargoyles. Giving even more insight into Frollo’s character, the gargoyles represent very literally his internal demons. Left to their own devises, they jerk and leer like ghastly ravens, but they sync up to Frollo with incredible accuracy, even mirroring his movements in fight scenes so that this one man becomes an army.

With the physical range of Frollo, Quasimodo, and Esmeralda, The Hunchback of Notre Dame is fertile ground for Synetic Theater. The story is a lasting human drama, and its many fights are a great opportunity to show off their skills. With additions like a more humanized Frollo and the army of gargoyles, Synetic leaves Hugo’s classic even better than how they found it.

Marshall Bradshaw is a DC-adjacent critic, actor, and game designer, with a secret identity in business development and marketing. He has written for DC Theatre Scene since Capital Fringe 2016, and his work can be seen on our website, on Washington City Paper's, as a collaborator with Damocles Thread Development, or experienced live at MAGfest. You can find more of him on Twitter @dMarshallb or at the Fringe Bar doing his part to clear the place of Genny Creams.