Who says theater is not educational? Why, just this past weekend I learned that “bootycandy” is a euphemism for the penis.

Vocabulary expanded, thanks to playwright Robert O’Hara and Iron Crow Theatre’s sexy and seditiously funny production of Bootycandy, O’Hara’s quasi-autobiographical play about growing up black and gay in America.

This outrageous comedy will have you snorting with laughter, but there is darkness, anger and confusion behind the kaleidoscopic vignettes on sexual and race relations as seen through the lens of main character Sutter (Justin J. Bell). The bookwormish, dictionary-toting, keenly observant Sutter is born to be a playwright and writer and Bootycandy goes back and forth in time to show his complicated childhood, the attempts to pigeonhole him and make him a “real man,” as well as his sexual identity and anarchic acts against white, straight society.

Of course, Mom no doubt meant for Sutter’s bootycandy to be enjoyed by the ladies, a fact she confirms during the hilarious, stinging “Happy Meal” scene where Jey Holman takes her turn playing the mother, bitching about her day at work while her husband (Jared Swain again) hides behind a newspaper and Sutter tries to get his story out about a man following him home from the library.

Mother goes fabulously crazy, blaming everything from reading books to musical theater for Sutter attracting an adult predator and stepdad calmly sips his coffee and grunts such helpful advice as “Bend your knees when you bend over” and “Take up sports.” By the end of the piece, Mother has vowed her son will take up baseball or soccer and “have balls in his face” by God this summer and the look on Sutter’s face is priceless. 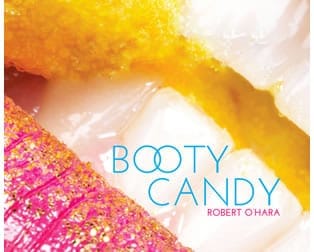 Loose in humor and format, Bootycandy is not for the prim or those stick-in-the-muds who insist that plays need a plot, a through-line, dramatic arcs, or character development. Against a black background and a simple set consisting of movable cubes representing nightclubs, sofas, pulpits and other structures, the up-for-anything ensemble cast takes an unbridled journey through desires, libido, and the need to push through boundaries.

A particularly memorable scene shows a fire and brimstone preacher (Swain) delivering a speech concerning an anonymous letter he received about “sinful” young men in the choir. Instead of a rebuke, the reverend lets out his inner Whitney Houston and raucously delivers the  lesson of sexual tolerance.

Another gem has two relatives (Lundy and Holman) hooting about the name one of their daughters just bestowed on her baby. Not to ruin the moment, but let’s just say it rhymes with “saturnalia.” This so-named child reappears in the second act, a grown-up woman participating in an “uncommitment” ceremony with her female partner (Lundy and Holman). This scene is one of the highlights, as the pair pledge to “take each other for granted” and “vow to grow old without you.” The zinger at the end is just icing on a delectable slice of derision.

Some of the scenes are pointed and political, such as the one where a clueless white moderator (Jesse Marciniak) leads a conference on black playwrights where he asks such tone-deaf questions as “How did you get the name Terry O’Malley?” To which Lundy’s character replies “Slavery.”

O’Hara pushes boundaries in two unsettling pieces, one about having sex with avowed “straight” men and another scene in the same vein, where Sutter and a gay friend (Bell and Swain) play dangerous, cruel games with a drunk white man who trolls them in a bar.

The show’s pacing and timing could be tighter, but the material is so rich you can forgive some lags and fluffed lines.

In Sunday night’s Tony Awards, best actor in a musical winner Ben Platt (for Dear Evan Hansen) proclaimed in his acceptance speech “the things that make you strange make you powerful.” Robert O’Hara and Bootycandy are definitely evidence of that.