Eleanor Burgess’ play could, with justice, be called Oleanna — The Next Generation. Like the Mamet play, this is the story of a student and her professor. Like Oleanna‘s Carol, Zoe’s (Margaret Ivey) initial mission is to impress her professor, Janine (Robin Walsh) with her eagerness to comply with the professor’s advice. As in Oleanna, when things go south, a recording device raises the stakes, considerably. And Janine’s ultimate fate — well, let’s just say you won’t be surprised.

And yet there is a significant difference. In Oleanna, John the Professor is pretty much a pompous ass whose learning is mostly obscurantist, and whose purpose seems not wholly free of lust. Janine, though patronizing and reeking of egotism, has no ulterior motive beyond her own vanity. And what sets her and Zoe against each other is an intellectual argument. Here, try it on for size.

Many revolutions have come in two phases — one led by the nation’s business class, intellectuals and lawyers; and then a more radical revolution, led by the nation’s underclass. History is replete with examples: France, with Robespierre following the Girondists; Russia, with the Bolsheviks following Kerensky; and Iran, with Ayatollah Khomeini following Bakhtiar. Why didn’t it happen here?

Zoe’s provocative thesis is that slavery prevented a second revolution: that since there was an underclass which was completely subservient, there were no potential revolutionaries against the social and economic order — except for the slaves themselves, who were brutally suppressed as a matter of course.

If true, the implications are staggering. Had Alexander II not freed the serfs, would Lenin never have come to power? Is history’s lesson to the autocrat that he must so mercilessly control the lowest economic class that it can never rebel, thus protecting his country from radical revolution?

But none of this is Janine’s issue. Nor does she suggest that Zoe, an African-American, uses racism as an analytical tool because that particular sin is important to her personally. Instead, she accuses Zoe of failing to document her thesis sufficiently — to prove it, from real evidence and primary sources. (Zoe’s paper is footnoted with internet references which sound a great deal like Wikipedia.)  Zoe, whose dance card is full of protests and whatnot, doesn’t really have time to slog through original sources, assuming that there are any. At the same time, she needs an A in the course to contend for a position she profoundly wants. 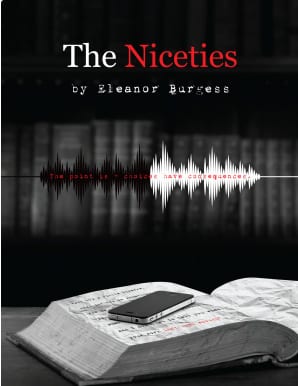 So far, we see what is essentially the war of student v. professor; a one-sided struggle for power which has been with us from the time of Socrates. But then, as in Oleanna, there is a moment which flips the power relationship. As in the Mamet play, it involves a surreptitiously recorded speech.

The problem is that Janine says nothing, in her five minutes’ of recorded rant, that any rational person would worry about hearing on national television. She defends Washington and Jefferson as national heroes, notwithstanding that they were slaveholders. She points out that though slavery was a great American evil, Zoe is not a slave any more than Janine is her Polish ancestors, and had no special entitlement to have the practice described in the fashion she preferred. She complains that modern academic orthodoxy makes her qualify her judgments with so much specificity that it becomes difficult to communicate. She argues that a stern mentor, rather than a supportive one, is more successful in making the protégé successful.  In short, she makes pronouncements which are commonplace in our political discourse, and in the academy. (The college is never named, but it appears to be Yale, since it is described as an Ivy League school in Connecticut.)

Is that what she is terrified will become public? Apparently so, for as soon as Janine learns that she has been recorded, she turns into a whining supplicant, begging Zoe not to send the recording, confessing her guilt for all sorts of badthink, offering dazzling inducements (including using her influence to get Zoe the job she wants) — if only she would throw away those recorded words. You can imagine what she gets.

Perhaps she was right to be afraid. In the second Act — startlingly derivative of Oleanna‘s weak third Act — Janine is laid low, suspended from her teaching responsibilities without pay and a pariah among the historians. The principal business here is more begging, supplemented with a lame threat. Perhaps the better substitute title is Terror in the Academy.

Throughout, Burgess paints Janine as wheedling, simpering, constantly seeking approval — in short, a caricature of the modern liberal academic. Matters are not helped by the fact that Walsh, at the show I saw, was not off book (she was suddenly called in a week before opening) and thus somewhat more hesitant than she might otherwise have been. But in most ways Walsh gives us exactly the Janine that Burgess painted, pathetically hinting that Zoe was the daughter she always wanted and hoping to enlist Zoe’s admiration by trumpeting her distaste for the Republicans.

Zoe describes Janine as “intimidating”, but she is the least intimidating professor I’ve ever seen. I had a professor who told me that I wrote like a well-educated foreigner as he returned my paper with an F on it. Well, at least he said I was well-educated, I muttered as I walked away, trembling, and I resolved to write better. That’s intimidating.

Ivey’s Zoe, on the other hand, is as fierce, aggressive and incorruptible as any Socialist-Worker hero ever was. She is a lion upon a gazelle; she is Tyson on Michael Spinks; she is the future upon the past. She reminds me of the quote from the immortal boxer Eric “Butterbean” Esch: “When they cry, that means you should hit them harder.”

In an interview with the CATF’s Sharon Anderson, Burgess says that she is trying to shine a light on the Academy’s need to be aware of the sensitivities of minority students. But is hard to imagine that the hyperaggressive Zoe has sensitivities. Indeed, I think most sympathies would be with Janine if she weren’t so spineless.

The Niceties is a derivative work of a flawed, but still much better, play. I think that Burgess’ ambition — which appears to be to give us a work which explains the current campus mania for political correctness in a way which makes it appear sensible, even justified — is one worth pursuing. This ain’t it, though.