John Morogiello has had us laughing since his 2009 Irish Authors Held Hostage which Steven McKnight called “inspired silliness.” This year Morogiello moved beyond the cushy confines of the playwright when he established a professional theatre company, Best Medicine Rep Theater Company. Morogiello, Best Medicine’s Artistic Director, swears all productions will make us laugh, for, as he observes with deadly seriousness, “Comedy levels life’s playing field.” 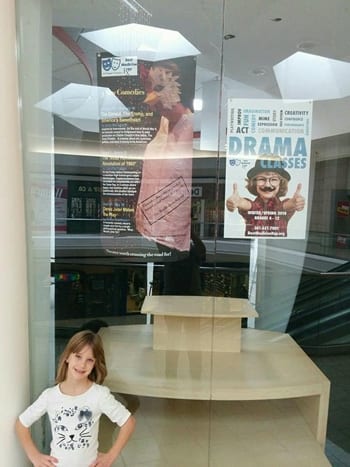 Morogiello’s company has been holding free readings in the Community Room of the Lakeforest Mall in Gaithersburg, MD. In November, they moved into their new 4500 square foot space, H205 in the Mall, which will be kept busy with monthly play readings, a New Plays/New Voices Festival in April, classes in comedy for kids in grades 4 – 12, and their first season of fully produced plays..

Best Medicine Rep is one of only two professional theatre companies in the country dedicated to new comic plays.

Inspired by true events, The Consul, The Tramp, and America’s Sweetheart is set on the eve of World War II, when the nazi consul to Hollywood attempts to shut down production on Charlie Chaplin’s controversial first talkie, The Great Dictator. Written by John Morogiello, the script has won a number of national awards, including the Julie Harris Playwriting Award and the Dayton Playhouse FutureFest.
Runs January 18 through February 11, 2018.

Jennifer Faletto’s The Texas Homecoming Revolution of 1995 details the hilarious effects of scandalous graffiti on a suburban high school. The script was developed at Great Plains Theatre Conference, The Blank, and Amphibian Stage Productions.
Rune March 1 – 25, 2018.

Derek Jeter Makes the Play is Robin Rothstein’s funny examination of a couple who lives by a single, philosophical question: What Would Jeter Do? Is their love for the former Yankees shortstop coming between them? Ms. Rothstein is also the author of the off-Broadway hit Mad Libs Live.