This Little Light, like so many Venus Theatre productions, is a gem that radiates the very joy it dares us to find in ourselves, and each other, when we fear we’ve lost it most.

If you ask middling millennial Sadie Sims, she’d probably say the woods are good only for self-imposed “blackouts,” wherein one disconnects, quite literally, from technology. And the constant flow of the Internet. Text messages. Voicemails. So, there sits Sadie (Katie Hileman) wrapped in a sleeping bag. Cell phone in exile. Her blackout manual in hand. A tiny lightning bug invading her tent, until she sequesters it in a jar and sees its marvelous little light magnified, even if she can’t see herself sailing the seas or walking down a dusty highway in the Wild West. 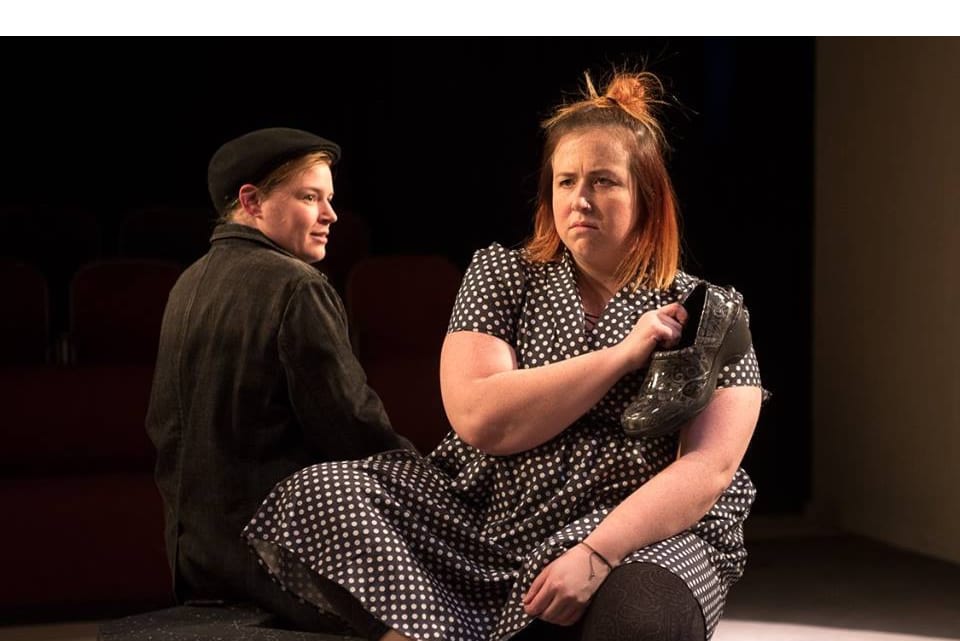 (l-r) Christina Day and Katie Hileman in This Little Light at Venus Theatre (Photo courtesy of Venus Theatre)Enter Sadie Sims (Deborah Randall), the 1915 iteration—a hard fightin’, gunslingin’ woman in a man’s world. Next, Sadie Sims (Christina Day), the captive of a drunken pirate, is shipwrecked in 1815. Except she’s called Samuel, a man who feels he’s really a woman. Then, there is the future Sadie (Kyo Sin Kang), the last of the humans, exploring an alien planet for life.

Have you ever, while laying bed just near sleep, repeated your name aloud over and over and over until it empties itself of meaning or feeling? And you are left with just you: past, present, and future. That is This Little Light. Intrigued? Of course you are. Everyone ponders whether the “self” harbors forgotten memories or carries beyond the moment, which for 2015 Sadie includes endlessly folding clothes at a struggling Macy’s with a sad bunch of employees—Marie (Randall), Sharee (Kang), and Victor (Day).

If it seems I’m meandering around in describing this play, I am. It’s hard to pinpoint directly what’s special about This Little Light—a fantastical science fiction-esque Walden. It’s poignant and surprisingly funny, especially the rag tag crew at Macy’s, whose easy banter with Sadie as they work unveils the commonness of the human condition regardless of age, gender, or generation.

Each Sadie is distinct, thanks to such marvelous actresses. Day, who is a striking woman, makes a great man, playing Victor with casual swagger and shrugging off his transgressions as if they are for a greater good. It’s a far cry from the articulate, honest Samuel. Kang, as 2115 Sadie, plays not only against nothing in Part 1—like the others—but also against a new world. Who knows what deep space or the future holds, except perhaps human annihilation, which has left her desperate for connection. Randall, who also directs (among a few other roles) proves once again that she’s a multi-talented maestro. Her Marie is a hot mess, while her 1915 Sadie breaks under the weight of her crimes.

“Longer I live, stronger I feel my guilt,” she says of having shot a man. Yet, she carries on, just as do 1815 Sadie and 2115 Sadie. All live on the cusp of a new world order, challenging archaic notions of what it means to be female. And, while each feels frail, they are truly resilient.

2015 Sadie doesn’t fully see this about herself until they all collide in Part 3. Hileman’s snarky, eye-rolling heroine dares—fully connected to all parts of herself—to venture back into the woods. Happily. Her performance is perhaps the most understated of the bunch and truly authentic. As she captures and shoulders the neuroses and angst of a generation deemed selfish and whiny before they’ve even had a chance to impact fully the messy world they are being handed.

Jennifer Faletto’s droll and contemplative script flows like an ode, reminding each of us in its three parts to be kind to one another and ourselves, for we have traveled many miles and have many more to go. It will be easier if we do it together. And so, the four Sadies find themselves laying beneath the stars one night, communing over their shared, and divergent, existence. “Sometimes real understanding,” says 1815 Sadie “lives in the dark.”

Go. Enjoy the show. Then, say your name. Over and over and over again. You may be surprised who you find deep inside your own human light. Let it shine.

[Jennifer Faletto has a second well-received comedy playing in our area: The Texas Homecoming Revolution of 1995.]

Kelly McCorkendale is a dog-lover, avid quilter, and occassional creative writer who loves the color orange and boycotts cable (except “Game of Thrones” because, well, what if winter is coming!?). After college, she realized poets weren’t in demand, so she shipped off to Madagascar with Peace Corps. Since then, she’s found a niche working on health systems in Africa but has a long-list of life tasks yet to be fulfilled–such as perform blackmail, learn a trade, and become a competitive eater. She has an MA in International Education, believes rice is the elixir of life, and, in high school, won the best supporting actress honor for the state of Missouri. She may also recite poetry (her first love) when imbibing in alcohol.