You’ve binge-watched “Breaking Bad,” “Orange is the New Black,” and “House of Cards.” So why not binge-watch the reign of England’s King Henry IV? asks Chesapeake Shakespeare Theatre Company. The Baltimore-based troupe has included Henry IV Part I and II in rep in its schedule for next year’s season, along with other classics from the 17th,18th, 19th and 20th centuries. 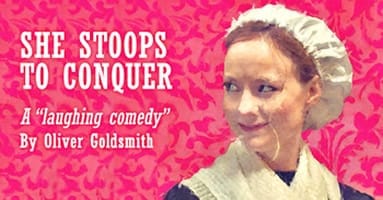 Chesapeake Shakespeare will lead off with Oliver Goldsmith’s She Stoops to Conquer, in which Kate Hardcastle discovers that her intended, Charles Marlow, is awkward and bashful around aristocratic ladies, but it quite the charmer with their plebian sisters. Kate decides to solve this problem by posing as a maid. Um, you’re missing the point, Kate — but no matter, things work their way out in the end. Chesapeake Shakespeare will run this 18th-century comedy from September 28 to October 31, 2018.

For the holiday season, as in holiday seasons past, Chesapeake Shakespeare will stage Artistic Director Ian Gallaner’s adaptation of A Christmas  Carol. Gallaner sets this version of the Dickens classic in 19th-century Baltimore. Previous iterations of this show have been a hit; in 2016, DCTS’ Jill Kyle-Keith said “if you see just one Dickens’ Yuletide story, let it be Chesapeake Shakespeare’s fine set-in-Baltimore A Christmas Carol. It has it all and then some: a nicely scary Jacob Marley’s Ghost (but not too scary for the little folk), lots of music, dancing, good acting, superior costumes, and a lightness and joy to the production.” From December 7 to 23 of this year. NOTE: this play is not part of the Chesapeake Shakespeare Season Subscription, but if you are a subscriber, you’ll get first dibs on tickets.

The two parts of Henry IV are in rep with Part I running from February 15 to March 30 and Part II from March 15 to April 7 of next year. Henry Bolingbroke has overthrown Richard II and assumed the crown; now he must keep it. Among his problems: his son Hal is a wastrel, who hangs around with Falstaff and his gang of hoods. Henry admires instead his nephew Hotspur, who is his best military commander. But when Hotspur turns against the King, Prince Hal must abandon his drunken revelries and become the leader he was born to be. Henry IV’s shaky hold on the throne continues into Part II, in which other former allies turn against the King and he needs his son’s help to withstand a massive attack on his throne. On select Saturdays (dates not yet announced) Chesapeake Shakespeare will schedule a Henry Marathon which includes both Parts, to be interspersed by a nice dinner. After that, you may feel like taking over a small country yourself.

In April, Chesapeake Shakespeare will feature Wendy Kesselman’s new adaptation of The Diary of Anne Frank. This is, of course, the well-known account of a young Jewish girl and her family, hiding in the sealed-off annex of an office building during the Nazi occupation of The Netherlands. The new version, Variety’s Greg Evans says, “at least partially reasserts the historic Anne’s darker vision as well as the diary’s overt Jewishness, clearly, if subtly….” The Diary of Anne Frank will run from April 26 to May 26, 2019.

Chesapeake Shakespeare will go outside for its next production, the Bard’s Macbeth, at PFI Historic Park, in Ellicott City. The murderous Thane of Cawdor, having been told by three witches that he will become the King of Scotland, decides to help fate along by offing the existing King. Thereafter, things don’t go so great. Shakespeare’s tale of evil and its consequences, moral and psychological, will run from June 7 to 24 of next year. NOTE: like Christmas Carol, Macbeth is not part of the season subscription, though subscription holders will have an early opportunity to buy tickets.

Also in the ruins of PFI Historic Park, Chesapeake Shakespeare will wrap up next season with a production of Shakespeare’s Love’s Labours Lost. This is the one in which the King of Navarre and three courtier resolve to swear off women and devote themselves to prayer and study. This resolution lasts for about a minute and a half when the Princess of France and her ladies show up, and thereafter all sorts of wicked — and wicked funny — stuff goes down. From June 28 to July 28, 2019.