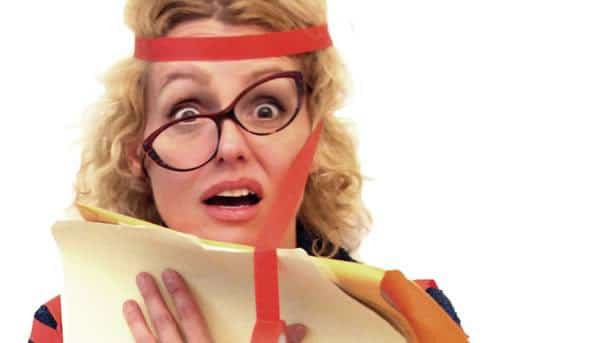 Several years ago, a good friend of mine married a Swiss citizen. Over many glasses of wine, she detailed to me having to provide emails, OkCupid messages, photos, and receipts to prove they actually loved each other so he could gain his American citizenship. At no point during her tales of navigating red tape like a member of the Mission Impossible team dodging laser alarm systems did I think to myself, “This would make a hilarious comedy!”

Not true for Irish playwright and standup comedian Sonya Kelly, apparently, who used a similar experience from her life as the basis for her romantic comedy How to Keep an Alien, which is being given its regional premiere courtesy of Solas Nua at the Dance Loft.

This production represents not only the first time the piece has been performed in DC, but also the first time the playwright has not played herself on stage. In Solas Nua’s lighthearted and spirited production, that duty falls to the dynamic and captivating Tonya Beckman. Kelly admits to being influenced by table monologists like Spalding Gray, but Beckman isn’t alone on stage—she’s joined by the versatile Nick Fruit, who plays Sonya’s stage manager, Justin, as well as a variety of roles including a snobbish choreographer; two drunken, brawling nightclub patrons; a taxi driver; and the object of Sonya’s affection herself, Kate from Queensland.

Kate, you see, is our inciting incident. Sonya, a disaffected Dublin-based actor, meets Kate when they’re working together on a production of a Russian play, produced in an Irish castle, during which everyone speaks with a British accent. The two fall head first into a whirlwind romance that’s cut short by the expiring of Kate’s one-year work visa and her deportation back to Australia. What follows is an unconventional journey through Ireland’s immigration system to try to get Kate to stay permanently in the country, all while trying to navigate a new romance.

Kelly’s background as a comedian shines through in her snappy bon mots (I particularly related to line, “I hate camping… it defeats the purpose of evolution!”), which Beckman delivers with wit and a wink. Director Tom Story keeps action moving and creates rousing bits of physical comedy and tender moments between Sonya and Justin. These two characters have an easy and lived-in relationship that would suggest years of working together.

Beckman and Fruit do their work on a set designed by Brigid Kelly Burge, who created a space that’s warmer and softer than any made up of shelves, desks, file boxes, binders, and other bureaucratic detritus has a right to be (I’d love to get some tips on her paper plane-making techniques, if nothing else). Marianne Meadows’ lighting design and Michael Winch’s sound design come together seamlessly to create magical moments and transport the audience across the globe and through time.

How to Keep an Alien is billed as “a comedy about falling in love and proving it to the government.” This may be the ultimate proof that I’ve been living in DC too long, but my main quibble with an otherwise fantastic script is that I wanted to know more about the bureaucratic red tape the couple is forced to deal with—for as boring as governmental policies and procedures are, when they intersect with real lives, the results can be quite dramatic. While, as an audience member, I appreciated the play’s overall comedic tone, I couldn’t help but think about how Sonya and Kate were in some ways charmed, especially compared to the nightmare that so many are going through with regards to the immigration system these days. I’m not faulting Kelly for this—her goal was clearly not to make a documentary of the minutia of Ireland’s immigration system—but it was something tugging at me from the back of my mind each time I laughed at a cartoonish portrayal of their visa agent.

What Kelly has created—and Solas Nua has so expertly brought to life—is a new twist on a rom-com set against the unlikely backdrop of deportation and paperwork. How to Keep an Alien gets to the heart of one particular couple going through the immigration process with humor and humanity—something the real-life immigration process is often deeply lacking.

John Bavoso is a DC-based playwright, book and theatre reviewer, and marketer. He is a member of the Dramatists Guild of America and a Pinky Swear Productions company member. His plays have been produced or developed in DC, Virginia, New York, Colorado, Texas, and Sydney, Australia. John's short plays include Adam & Steve, Kylie and Janet and Robyn and Cher, Happy Hour, and Threat Level: Cream, while his full-length works include Olizzia, Over Her Dead Body: A Bluegrass Benediction, and BLIGHT. John-Bavoso.com