I admired many things about my late father, among them that he never stopped learning or being curious about people and life, even at the age of 92 and grappling with major health issues. I took the spirit of my father into Baltimore Center Stage’s luminous production of Thoughts of a Colored Man and learned things I never would have known otherwise.

I always assumed that men have it easier than women, no matter what their race, recalling that line about actress Ginger Rogers, who it is said did everything Fred Astaire did on the dance floor, only backwards and in high heels.  This play made me see beyond my gender bias to recognize that everybody has it tough in their own way and women have not cornered the market on suffering.

For me, the experience of the play was educational and emotional; for many members of the audience it was recognition and validation. The man next to me sat with unwiped tears running down his face as he watched black men presumably much like him express their inner selves without shame or censure. The men onstage were saying what they felt and they were being seen and heard, front and center. You can’t imagine a more powerful dynamic between actor and audience. 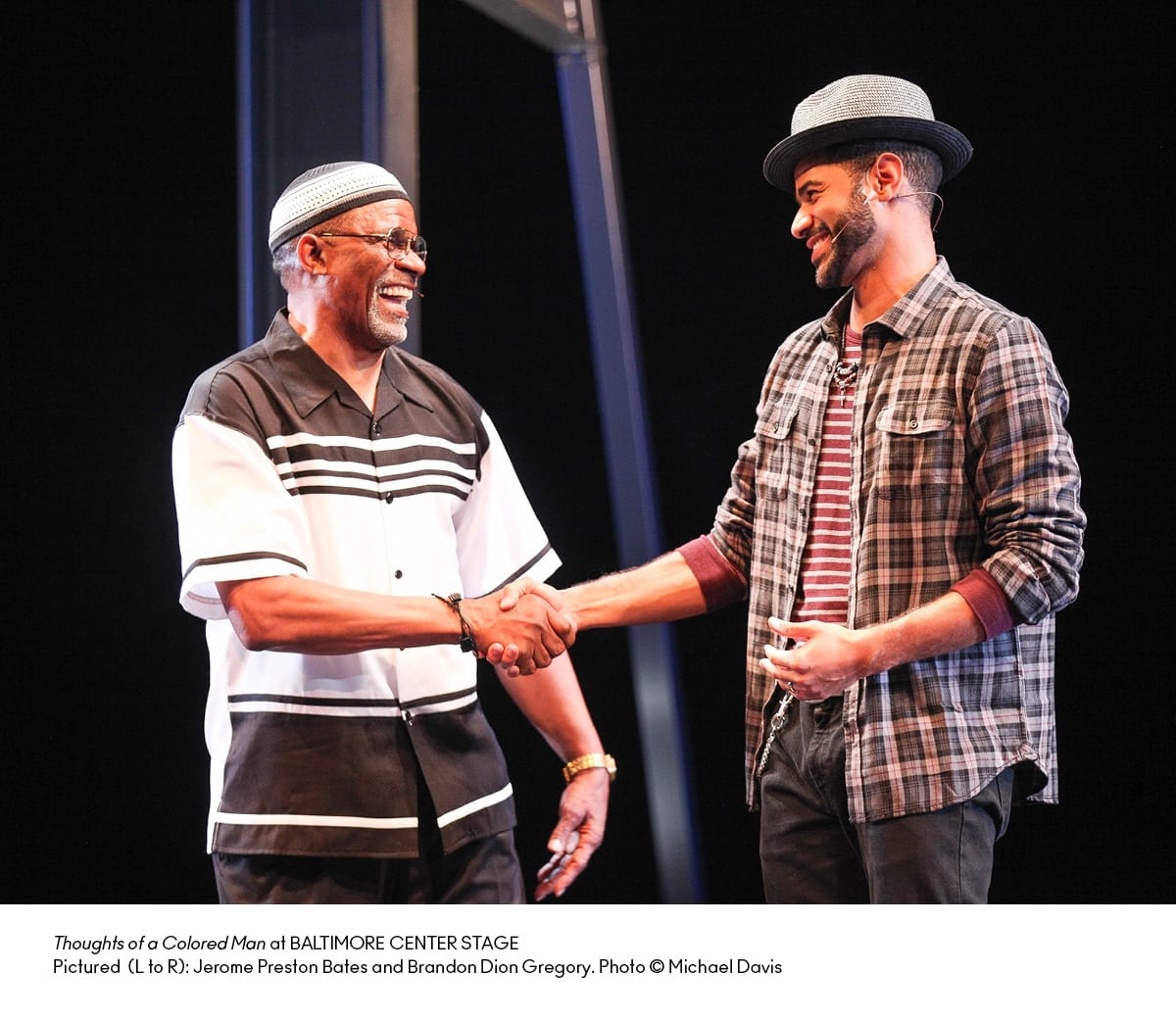 Keenan Scott II’s play is a co-production between Center Stage and Syracuse Stage and it is an enlightened partnership, resulting in a tight ensemble of actors, solid production values, inspired choreography and music, and fluid direction by Steve H. Broadnax that emphasizes the furious poetry of the piece without compromising theatricality.

The seven characters stand in spotlight under a huge billboard—a ubiquitous sight in any urban landscape—that reads simply COLORED in black letters on a white background.

This word takes on many meanings during the course of the 100-minute play. At first, it can be seen as an old school term for African-Americans, and in Baltimore-ese it describes a certain kind of television. To this day, people in Baltimore still often refer to their set as “colored TV.”

As the play deepens, the word “colored” changes, as the men portrayed go beyond archetypes or “types” of black characters we are normally accustomed to seeing in theater or other media. These men are colored by their experiences, frustrations, struggles and wrestle with where they fit into the world as a black man.

The seven characters are like a modern-day variation on the medieval Everyman morality plays, (interesting, given that playwright Branden Jacobs-Jenkins’ play Everybody is currently being staged down the road at Shakespeare Theatre). They are Wisdom (Jerome Preston Bates), Passion (Brandon Dion Gregory), Depression (Forrest McClendon), Lust (Reynaldo Piniella), Happiness (Jody Reynard), Love (Ryan Jamaal Swain, whom fans of the TV series “Pose” may recognize as the character Damon), and Anger (Garrett Turner).

In the course of one day in the Bed-Stuy neighborhood of Brookyn (Spike Lee’s turf), these seven men navigate through gentrification—a Whole Foods and fancy condos out of reach for most traditional residents are taking over old neighborhood hangouts and stand bys—black on black violence, racial and sexual identity and what it means to be part of a community. 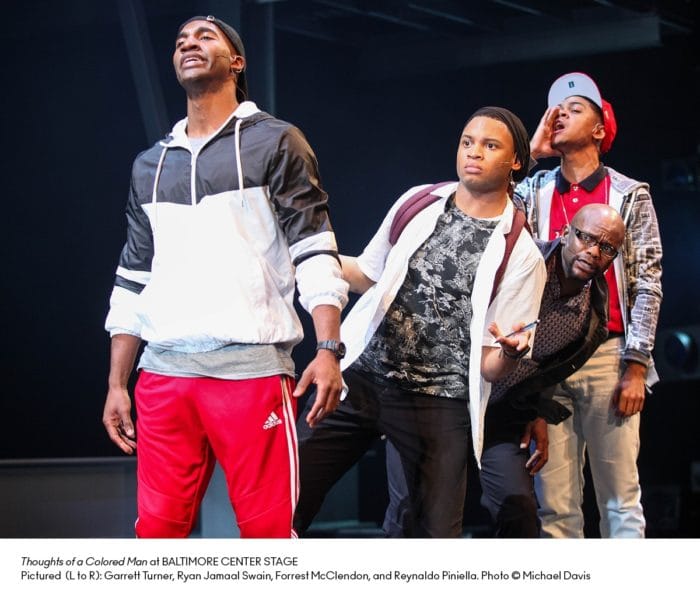 As the characters go through their daily routine of going to the barbershop (the men describe the barber as “the only thing closer to you is God and your mother”), grocery shopping, waiting for public transportation and standing in line for a coveted new style of Michael Jordan sneakers, they reveal sides of themselves that challenge and delight your perceptions of what a black man should or could be.

Love, played with smoldering charm by Swain, constantly writes down verse in a little notebook and could be a stand-in for the playwright, as he expresses through poems and spoken word his hunger for love and his appreciation for women.

Reflections on Thoughts of a Colored Man

In contrast, the player Lust (Reynaldo Piniella, his swagger tempered by a hint of confusion and naiveté) is often an expression of toxic masculinity, as he views women as body parts that are meant to be exploited. Wisdom, played by sagacity and banked fire by Jerome Preston Bates, expresses the middle ground that comes with age, as he celebrates his wife of many years as if she is the same young girl he feel in love with decades ago.

Thoughts of a Colored Man closes November 10, 2019. Details and tickets

Perhaps the most poignant character is Depression (an intelligent and searching Forrest McClendon), who gave up MIT to take care of his mother and brother. When he describes the vast aisles of Whole Foods as “another cotton field,” you acutely feel his pain as he is seen as an invisible, anonymous minimum wage worker with no future.

Similarly, successful upper middle class Happiness (a canny Jody Reynard) is by all outward appearances to have it all—raised by both parents, educated, a burgeoning career in finance. But he wonders if he will ever fit in in the neighborhood, since he seems to have two strikes against him—he’s gay and people often think of him as “less black” because he was raised by a strong father and mother.

“All we want is to be ourselves,” the men of Thoughts of a Colored Man ask the universe, and the audience. Is that possible? Can we as a society expand and embrace all the colorations of the black man? Or are we to see everything in black and white?