It’s surely pointless, four decades and two billion dollars after its debut, to rant about Evita, and silly to blame Andrew Lloyd Webber’s theatrical canonization of the amoral historical figure Eva Perón as paving the way for the elevation of another media personality remade into a dictator-loving populist. Still, this core problem I have with the musical stops me from fully embracing its revival at New York City Center, even as I acknowledge that the singing in this production is gorgeous, the orchestra lush, the choreography fun, and the story reinterpreted in some bold and intriguing if not always effective ways.

It’s undeniable that the musical’s catchy score has kept Eva Perón alive for U.S. theater audiences who would otherwise know nothing about a First Lady of Argentina with an ambiguous legacy who died in 1952 at the age of 33 – perhaps not coincidentally the same age as a more familiar figure that Lloyd Webber also built another hit musical around. In Argentina, Eva Perón reportedly remains a polarizing figure — either loved or hated. But in the U.S., the musical has turned her into….if not a saint, certainly a celebrity (In the lobby of City Center, they’re selling a t-shirt with the lyric “Just a little touch of star quality.”) This celebration is an ironic turn of events, since Lloyd Webber and lyricist Tim Rice seemed to intend a more complex morality tale – and arguably got closest to one in the first Broadway production, which starred a Patti LuPone unafraid to be off-putting.

The director of the City Center revival, 25-year-old Sammi Cannold, is known for her site-specific interpretations of old musicals, such as a production of Ragtime on Ellis Island. Cannold fell in love with Evita when she saw the 2012 Broadway revival while still in high school. She began extensive research into the actual woman at its center, studying her as an undergraduate at Stanford, visiting Argentina, even interviewing María Eugenia Alvarez, Perón’s cancer nurse and confidant

The production of Evita at City Center that results from Cannold’s impressive devotion leaves the original libretto virtually untouched (adding only “You Must Love Me” from the 1996 movie starring Madonna), but shakes up the casting, the tone and the design.

Cannold casts two actresses to play the lead character, Maia Reficco in the first few songs as the young Eva Duarte, a poor but ambitious girl from the sticks, and Solea Pfeiffer as Eva in her prime for the bulk of the story. Even when Pfeiffer takes over, Reficco hangs around, carrying a suitcase, as if Evita’s past always haunted her. This is part of a decidedly feminist spin. In the musical number “Buenos Aires,” right before Reficco turns into Pfeiffer, the choreography (by Emily Maltby and Valeria Solomanoff) presents Eva not as a calculating vixen who slept her way to the top but as a naïve young woman being literally tossed about by one military officer after another. 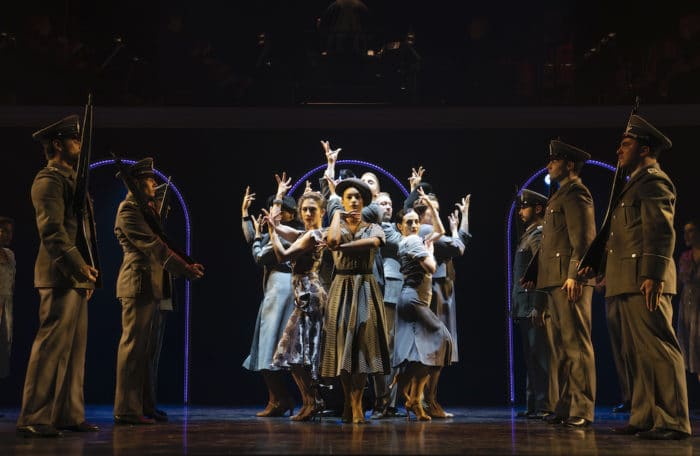 Pfeiffer’s singing is opulently operatic, and deeply appealing – a real treat, if you divorce the music from the message. Similarly, Jason Gotay is a clean shaven Che, who looks and sings like a matinee idol, and that’s a problem. Che is the narrator of Evita’s story, but he is also meant to serve as a counterbalance to the show’s celebrity worship of her, through his relentlessly biting lyrics:

Instead of government, we had a stage

Instead of ideals, a prima donna’s rage

Instead of help, we were given a crowd

She didn’t say much but she said it loud

But Gotay is beautiful not biting. Without that bite, there’s no counterbalance.

Much is made in this Evita of the iconic white dress, which is as often suspended mid-air, part of Jason Sherwood’s scenic design, as draped snugly around Pfeiffer. I thought that maybe the director meant for this empty dress to be a symbol of the Peróns’ empty promises. Or is it a symbol of how she lives on beyond her corporeal existence? I wasn’t sure what to make of the main feature of the set, some half dozen tiers full of white flowers, which rise up to the rafters and down to the floor throughout the show. Were these especially chic funeral biers? Were they meant to recall clouds, and suggest Evita was in heaven?  I’ve decided the white dress and the white flowers are symbols of a show trying to be elegant and entertaining, but also fresh and feminist – different but the same….and thus a bit confused.

Evita is on stage at New York City Center through November 24, 2019.

Jonathan Mandell is a third-generation New York City journalist and a digital native, who has written about the theater for a range of publications, including Playbill, American Theatre Magazine, the New York Times, Newsday, Backstage, NPR.com and CNN.com. He holds a BA from Yale and an MA from Columbia University, and has taught at the Columbia School of Journalism and New York University. He blogs at http://www.NewYorkTheater.me and Tweets as @NewYorkTheater.