The Inheritance, a long, ambitious play about three generations of gay men in New York, pays homage to two masterpieces, without being one itself. Yet the play by Matthew Lopez, making his Broadway debut, is both sweeping and intimate, sophisticated and raw, a weepy that is often funny. Several performances are transporting, including two actors making their Broadway debuts, and an actress who made hers 67 years ago. There are swoops into intellectual brilliance, such as when one of the characters elaborately compares America to a body, its democracy to a body’s immune system, and the current president to the HIV virus. There are dips into nudity and raunch. There is insight and debate and uplift.

Does The Inheritance need to be nearly seven hours long and in two parts to achieve all that? The short answer is no. But there’s so much here that’s so wonderful that it’s worth it to those with the stamina. 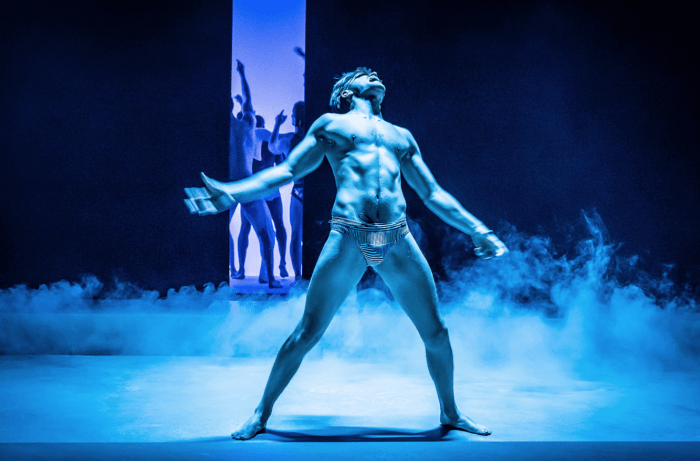 The plot is modeled closely, and openly, on E.M. Forster’s “Howards End.” Indeed, Forster is a character in The Inheritance, here called Morgan as the author’s friends called him (portrayed with appropriate  buttoned-up British poise by Paul Hilton.) His presence serves several purposes – one of which is to help extend the history of gay life beyond the current-day narrative: Forster was a closeted homosexual who in 1914 wrote a landmark gay novel “Maurice” that wasn’t published until after the novelist’s death in 1970 at the age of 91.

Morgan appears from the very first scene, amid a group of a dozen young gay men lying about on the nearly bare stage, pen or laptop in hand as if in the student lounge, each complaining that they have a story to tell but they don’t know how to tell it.

“You have stumbled across the writer’s most valuable tool: procrastination,” Morgan proclaims. He asks one of the young men what his story is about.

The friendships, loves and losses that follow are told by these characters, who function both as narrators of the action and participants in it, sometimes simultaneously, as well as a kind of Greek chorus reacting to what somebody says or does. Unlike a conventional Greek chorus, the ensemble members in the show portray a community of specific characters with names, professions, personalities and strong opinions, which they express in several political and cultural conversations distributed throughout the play.

The plot of “Howards End” (for those who don’t recall, or never knew – and you don’t really have to know the Forster book in order to grasp The Inheritance) involves three families, one rich, one poor, and one middle class, and their interaction with one other. The story begins with two sisters, decent stable Margaret and wild Helen; the central plot eventually revolves around a house called Howards End, and a twist about who will inherit it.

Lopez changes almost all the names, and transposes genders and sexual orientations, to tell a similar story that begins with a gay couple in their thirties, Eric Glass , a modest and supremely decent man who works at a non-profit (portrayed by Kyle Soller, the play’s steady anchor), and Toby Darling (Andrew Burnap, who has a juicy part and makes the most of it.) Toby, Eric’s live-in boyfriend of seven years, is a self-indulgent writer who denies his troubled, impoverished childhood, creating a literal fiction entitled “Loved Boy.” The novel has gained him something of a following, and as The Inheritance unfolds will be made into a play. Eric has inherited his grandmother’s spacious rent-controlled apartment on the Upper West Side, for which he pays only $575 a month – which elicits angry envious groans from the ensemble, and an appreciative laugh from the savvy New York audience.

That’s not the only real estate at the center of the story. But first I must tell you that Eric and Toby are friends with an older gay couple that have been together for 36 years, billionaire Henry Wilcox (John Benjamin Hickey) and Walter Poole (Paul Hilton again), and soon meet a younger man named Adam (Samuel H. Levine, in a breathtaking debut), adopted by a rich family, who wants to be an actor in the play they’re making from Toby’s novel. Eric and Toby more or less adopt Adam, befriending and mentoring him….for a time.

And so we have both the three social classes as in “Howards End,” plus the three generations of gay men that Lopez wants to tell us about.

What happens to them is wrapped up in a country estate that Henry bought for Walter in the 1980s, which we eventually learn Walter turned into a kind of hospice for people who were dying of AIDS; we discover this in a scene at the end of Part I that is among the most moving of the play. In Part 2, we see how it becomes a place of healing.

I really shouldn’t tell you any more details of the plot (even if I had the space and the patience to do so); much of the pleasure of the play, like it or not, is in finding out what happens to the characters. I can tell you that there are quarrels and debates, breakups and marriages, deaths and rebirths, and during the course of the play, a teenage character is newly infected with HIV – a deliberate effort to make AIDS more than just history. There is also a character named Margaret, who is introduced late in Part 2, connected to the country house. She is portrayed by Lois Smith, and every single line she utters is more than persuasive; it’s an astonishment; the 20 minutes Lois Smith is on stage would be rewarding even for people who didn’t care for the remaining six plus hours of the show.

Given the epic length and two parts, the setting among gay men in New York, the partial focus on AIDS, it would difficult to avoid comparing The Inheritance with Angels in America. Tony Kushner’s play was more urgent and more insightful, with its stories riveting and tragic without a hint of pulp. The Inheritance feels more a reflection of the blunter, pulpier sensibility of Matthew Lopez, now 42, whose previous well-received works include The Whipping Man, a dark drama about black Jewish former slaves at a Passover seder right after the Civil War, and The Legend of Georgia McBride , a comedy about drag queens.

The Inheritance is on stage at the Ethel Barrymore (243 W 47th Street, between Eighth and Broadway,New York, NY 10036)

Jonathan Mandell is a third-generation New York City journalist and a digital native, who has written about the theater for a range of publications, including Playbill, American Theatre Magazine, the New York Times, Newsday, Backstage, NPR.com and CNN.com. He holds a BA from Yale and an MA from Columbia University, and has taught at the Columbia School of Journalism and New York University. He blogs at http://www.NewYorkTheater.me and Tweets as @NewYorkTheater.