I always root for romance, even in plague times.

Maybe that’s why I was completely drawn in by THE MIXTAPE, local playwright and Bowie State professor Bob Bartlett’s “connection during coronavirus” play that unfolds entirely through a series of Facebook posts and in his readers’ imaginations.

Bartlett, who memorably set his play, The Accident Bear, in an actual laundromat in downtown Annapolis in 2018, is also the author of The Regular (about diners), Union (based on Walt Whitman), and a memorable E2, a dynamic adaptation of Edward II that was part of Rep Stage’s 2019 season.

DC Theatre Scene’s critic Jayne Blanchard “spoke” by email, as it only seemed fitting, about the experience of writing MIXTAPE and the effect the posted play had on his eager Facebook audience.

What was the impetus behind this FB play?

All of us who work in theatre have had to reconsider what we do and how we do it. It was probably early April when the reality of a year without theatre settled in for me. I was discouraged. Why keep writing plays that no one will produce or develop and that audiences won’t see?

I’d recently told a few friends that I would spend the summer working on that screenplay I’d never finished, and I would just write for myself and stop the maddening chase for productions. I don’t often have impediments to writing, so there are days when I have to tell myself, “okay, no writing today.”

The day this play, this serial of fifteen or so micro-plays, started, April 18, was one of those days. I went out for a morning drive, which is when I often think about whatever I’m writing or planning to write, and I stopped at the Starbucks near my house, which – having a drive-thru – was the only coffee shop in the area that was permitted to be open during Maryland’s stay-at-home order. The line of cars was long, as it had been for the preceding few weeks; a song playing in my car inspired me, and I started fantasizing about a moment that could occur when I got to the window, so I typed a fictional exchange between “me” and a fictional “barista” on my iPad and posted it to Facebook. Perhaps subconsciously, I was thinking that folks needed a hopeful moment, and I certainly did.

Well, I’m a fan of the form, which involves a writer inserting themselves into their narrative like Kerouac had done in On the Road or Conrad in Heart of Darkness, as well as ways the device can be twisted, as it is in one of my favorite episodes of The X-Files, Musings of a Cigarette-Smoking Man. I’ve always wanted to try inserting myself as a character into one of my plays, but the right play hadn’t come along. I had no intention with that first or even second post of writing a play on Facebook about a fictional romantic encounter between someone like me and a barista who looks like Richard Thomas, but what else is a writer gonna do every morning while waiting in a long line for coffee?

At what point did you decide to let it all play out on the FB stage for an audience of your friends?

I guess it kept going because of the response I was getting. Friends were enjoying this little romantic adventure. I’m still surprised by the reaction. I’d confessed to a handful of playwright friends that the situation was fictional, but otherwise I allowed my imagination to wander and readers’ excitement to grow. Every few episodes, a savvy theater artist or fellow writer would comment about their hope that this wasn’t some elaborate writing exercise or performance art playing out at their expense. Ouch. And some writers I respect commented from time to time that this was the best pandemic theatre currently running on the internet, which absolutely encouraged me to continue writing.

When did you decide not to let on that this was not real? Many people–like me–got totally sucked into the posts, the dialogue, the trajectory of the plot.

That’s a good question, because I’ll confess to feeling a bit guilty about possibly lying to my family, friends, and colleagues. I responded to some comments, pretending I was the “me” in the play, and convinced myself that I wasn’t lying but doing what playwrights do: I’d invented two characters and had them play out a situation, in this case the beginning of an unexpected relationship. Sure. I’d been checking out the zeitgeist of online and Zoom theatre and readings, and I was considering ways that I could continue to get my work into the world while in quarantine, but I hadn’t imagined Facebook as an option, even a playful one. I’m not one of those writers who tosses their work out on social media (although many of my plays are available online at NPX). But this seemed fun – and then it sort of became a thing that engaged an audience. Well, isn’t that what we do? What we crave? 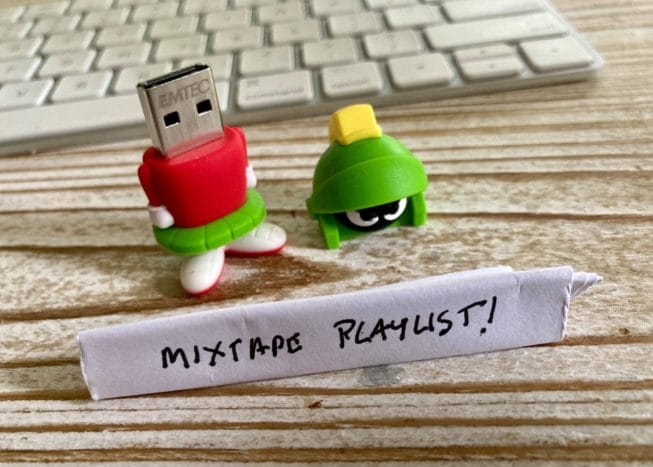 Part of the play’s attraction is two people connecting and even wooing each other (with that time-honored device, the mixtape). While we’re all isolating, seeing two people flirting and getting to know each other was heady.

Almost every episode features a song playing in my car while I’m pulling up to the drive-thru window for coffee, and I love the significance of music in my characters’ lives. The mixtape wasn’t my idea. I’m a bit of an audiophile – and back in another life I owned a rather unsuccessful record store – so music is a part of my everyday life. I’m either listening to music or NPR while in my car, and sound and music are important in my writing process. But it was my friend, actor Jason McIntosh, who suggested in a comment to one of the episodes that I make my barista a mixtape as a way to show him my interest. That suggestion, as much as anything else, incited the continuation of the story, in part because it was dramaturgically perfect timing and helped hook my audience; they wanted to know what would happen next.

Oh, I’ve made my share of romantic mixtapes over the years, and I kind of miss the challenge of the process: selecting the songs and painstakingly fitting them onto a Maxell UR 90-minute cassette. Selecting the songs for these fictional mixtapes was a highlight of the experience. I’ve created playlists for plays as I’m writing them, and for specific characters, even assigning a character a song that has great meaning to them. It wasn’t until a day or so after the initial mixtape episode that I’d thought “Richard Thomas” might make one for “me” in return. I also had to respond to one friend’s post about photographic evidence, so I posted a photo of the mixtape, a geeky flash drive, that I’d created and given to him. I’ll admit that I’m rather pleased with the soundtrack for the play, which largely stands apart from the two mixtapes the characters make for each other. The episodes were all written while I was waiting in line for my coffee, and I’d often select the song that would be playing while driving to the coffee shop.

What’s next for these two characters? Are there one or two more episodes left to wrap things up? What would their story look like in a post-pandemic world?

Yeah, I feel like the story is near its end. There are one or maybe two more episodes in this part of their courtship. I haven’t thought much about these characters’ lives post-pandemic, but friends have posted comments suggesting the relationship is serious and will last (wedding bells, even!). I have thought about how we navigate COVID-19 in new relationships. I imagine that as trust grows between my characters, and they assure each other that they are taking social distancing seriously, they’ll begin to interact as any couple in lockdown.

What did you hope to convey or achieve with this? Were you exploring the idea of new ways to do theater, just noodling around, playing with different forms?

All of those. If the world has learned anything in the past couple of months, it’s how desperately we need art in our lives – and, equally, how desperately artists need to create. We’ve seen the resiliency of the artist all over the planet: musicians, singers, and dancers performing online from their windows or balconies; actors, painters, and designers creating online and sharing their work; and people all over the world diving into old and new creative endeavors (I recently bought a soprano saxophone and have started playing again for the first time since my college years).

For one of my classes this semester, I assigned a final exam that required students to write a short rant monologue and shout it out their windows, telling the world what they miss and what they hope to retain about this new way of living. This writing experiment, THE MIXTAPE, as it’s now titled, is me shouting out my window and yearning for human connection.

What has your experience been like with virtual, streamed and ZOOM theater? Are you watching theater in these forms? Do you like it? Are you interested in exploring these new genres?

I’ve been watching, like so many of us. I’ve had a reading or two on Zoom, and just finished a week-long Zoom workshop of my play THE REGULAR, which is headed next week to Seven Devils Playwrights Conference and that this year will be an entirely online development experience. Zoom theatre isn’t ideal, but it’s what we have right now. And I’m working on a Zoom play at the moment with a playwright buddy which will hopefully be out in the world soon. I really enjoyed the Public’s Zoom production of Richard Nelson’s What Do We Need To Talk About? – and Andrew Scott in Simon Stephens’ Seawall.

What about your students? I know you taught online this semester. How did you use video, virtual theater etc. with your students?

The semester was quite a challenge. We were required to teach synchronously – in real-time – with technology that wasn’t always cooperative. We encourage our students to see a significant amount of live theatre each semester, so in some ways access was easier for us because artists and companies are offering so much content online. Some of my students were able to see Studio Theatre’s production of Antoinette Nwandu’s Pass Over before the theaters shut down, and the rest watched a filmed production of the play online. And they watched a production or two of Waiting for Godot, in response. We were not lacking for online theatrical content. I was also able to invite colleagues and artists into my virtual classroom with ease, so in that way students had experiences they wouldn’t have had in a physical classroom. I don’t teach performance courses, so I didn’t have the challenge of teaching acting or production online.

What does this play or exercise say about artists persisting in this new world?

That we’ll find a way, until we can gather again in a room. And that humans crave story. And that there are ways for theatre artists, in this case, playwrights, to continue sharing stories that matter and move us.

The complete (or almost complete) Facebook play, THE MIXTAPE, is posted at bob-bartlett.com.