“I froze, not knowing what to do, instantly realizing … that he had all the power to hire me, and if I said no, I risked having any kind of role at one of the largest theatres in the country. And maybe farther than that; how could he damage my reputation?” – Confession Statement*

On Saturday June 13, 2020 the body of Oluwatoyin Salau, a young female activist, was found in Tallahasee, FL. The news shook me to my core. At that point most of my days were spent out on the streets protesting, distributing supplies or capturing the Black Lives Matter movement in DC.

It was the idea that a young woman could lose her life in the midst of doing such important work. The idea that the same community she fought for could so easily miss the danger she was fighting. Her story followed me into my dreams, her memory marched beside me in the streets and her fight trailed behind me, craving change. I realized that her story stuck with me because the narrative was familiar; homely even.

Oluwatoyin Salau, to me, represents similar stories that many of us carry. I wanted to do something to wake the world up to the Women and Non-Binary people who juggle their suffering and sanity daily. I wanted to help close the gap of misunderstanding, so that the world can see that protection is needed. We deserve to live free from the burden society assigns, along with our gender.

“a sound technician … during the show where I was doing my quick changes, made a comment to me during a show about how good I would look on my knees.” – Confession Statement*

A month ago, I was lucky enough to gather with 6 other Women and Non-Binary theatre artists to discuss creating a safe and equitable industry. The participants made me feel seen, the truths we shared made me feel free and the discussions that followed made me hopeful. We were having the conversations that could really lead to change. Shortly after, a comment from an anonymous viewer made me realize that not everyone would feel the same. Despite the opposition, I was in awe of how quickly our theatre community bands together to speak up for us. I watched in real time as our community created a clear example of the kind of protection and unity we all could use more of.  I realized, then, this is the work that we ought to be doing. There had to be some way to bypass the algorithms and truly have the conversations that aren’t the most comfortable, but are needed.

I reached out to more than 50 Women and Non-Binary theatre artists in the area; 25 of us gathered along with a Black Woman Therapist to participate in a digital version of the notorious “Cross the Line” exercise. A collection of disparity statements would be read and if any participant had ever personally experienced them, they would raise their hands

“I feel like I am constantly having to prove my worth, to the point where I’m developing imposter syndrome. Like do I even really deserve the position I have?” – Confession Statement*

I sent a massive call to Women and Non-Binary Theatre artists from all over to anonymously submit disparity statements for the exercise. I was expecting a sentence or two from each participant similar to the example provided: “I have been paid less than my male counterparts”. Instead, I began to receive confessions* of experiences some had never spoken aloud before. In that moment, there could be no clearer sign that this work needed to happen.

Having planned the exercise, I had ideas of what the experience would be like. Nothing could have prepared me for how it would feel to look at the faces of so many artists that I personally admire, only to see myself reflected back. Not just the hurt, but the power. The power to still carry hope despite the moments of pain. Each participant was an infinite source for love, understanding and change. Over the course of an hour we shared stories, shared space and most importantly shared our truths in the hopes that we would never have to carry them alone in silence again.

When you watch this trailer, I hope you feel the strength of these beautiful humans who were willing to take the first step if it meant those after us could be free. May these faces make you hungry for change, eager for conversation and ready to take action.

This is only the beginning.

Join us for the first SoSu conversation, Wednesday, September 2nd on my YouTube channel.

The SoSu Series creates a space to highlight the work of Black, Indigenous Women (cis and trans) and Non-Binary People of Color working in the DC Theater scene through a sequence of video interviews. The artists interviewed will talk about their personal artistic ventures while also engaging in conversations around the untold struggles of being a Woman or Non-Binary in an industry that often directly neglects, mishandles and silences them.

“The set designer told me I couldn’t wear things like that, as it would give all the male designers in the room an erection. He passed it off as a joke. It wasn’t funny or appropriate.” – Confession Statement*

Our goal is to be radically honest about the tough subjects there has been little space to address. It’s about taking the space that is owed, while demanding that space be made moving forward. Moments of injustice happen at least once in every single production. The offenders often go unnamed and the recipient of the action normally carries the weight of the experience on their own in silence. This series is about breaking that silence. It isn’t about “canceling out”, it’s about having the conversation.


How to support The SoSu Series: Contributions gratefully accepted via Cashapp ($TheSoSuSeries) or Venmo (@TheSoSuSeries)

Meet the artists behind the trailer for The SoSu Series

“Our lives consist of a collection of stories. Those stories shape our behaviors, habits and personalities. Ultimately, those stories are a reflection of where we’ve been and where we’re going. As a BLACK Person, I carry the weight of all those who came before. As a Black WOMAN, I carry the silence of those who never got a chance to speak their truth. As a Black Woman in AMERICA I carry the strength required to push past the barriers intricately stacked against us. As a Black Woman from WASHINGTON, DC, I carry the history of my ancestors who built this land only to be washed away in the promise of something greater.

My art is a reclamation; my promise to those who came before me that we will no longer be forgotten. Years ago in Africa, the keeper of stories was called, a “griot”. I am the self-proclaimed griot of my dear city, my dear Washington, DC. With each piece I aim to weave the line that connects us. May my voice be impenetrable like wind, my rhythm as dynamic as fire, my art infinite like water and my passion firm like the earth.” – Billie Krishawn

Billie Krishawn is the curator for The SoSu Series. Traditionally a theatre and film actor, Billie is a DC native, a graduate of Duke Ellington School of the Arts and a Theatre alumn of Drew University (BA). Since the quarantine, the twice Helen Hayes nominated actor has shifted deeper into her visual arts, photography and community care activism. Learn more about her work by visiting her YouTube channel and at BillieKrishawn.com. 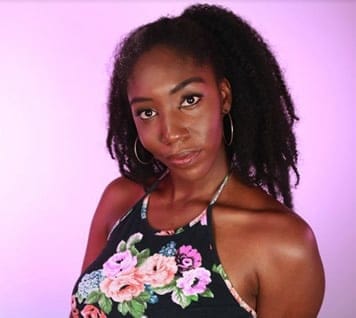 Tiffany Byrd Harrison is an actor, content creator, and video editor for the SoSu series, currently living in Atlanta, Georgia. As a former DMV actor, she understands the pressures of representing your race and/or gender in all areas of the industry. She is grateful to partner with DC Theatre Scene in producing work that elevates marginalized voices and holds leadership accountable for eradicating injustice in the arts. Tiffany runs ASA Crave Studios, an accountability coaching/ video production company that teaches people to follow through on their goals and build thought leadership with video. You can find out more about Tiffany by visiting her YouTube channel,  and asacrave.com.

Billie Krishawn is an actor, artist and activist originally from Washington, DC. She is a graduate of Duke Ellington School of the Arts and Drew University (BA). You can follow her work on Instagram (@AbsoluteReality) on Facebook (“Billie Krishawn”) or her website: BillieKrishawn.com. Support for her photojournalism can be made via cashapp ($HuggingisHealing), PayPal and Venmo ($BillieKrishawn).