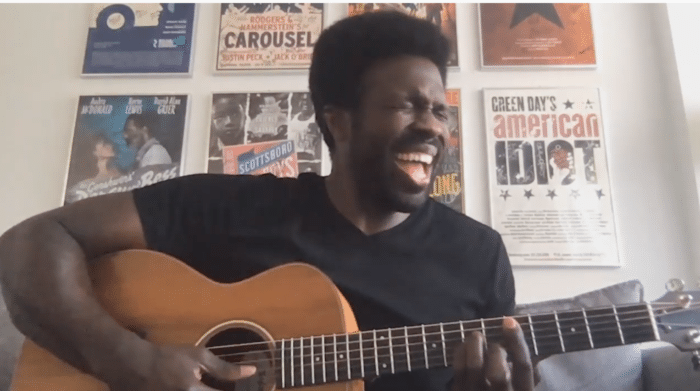 Joshua Henry, who is the theater world’s most unlikely Annie, sang “Tomorrow” (“The sun will come out tomorrow…”) at Miscast, followed by Heather Headley singing “Endless Night” from the Lion King (“Know that the night must end And that the sun will rise…”)

The hope for future sunshine seemed a fitting conclusion to MCC Theater’s annual concert, which since 2001 has showcased Broadway stars performing songs in roles for which they would never be cast. In the past, the event has been a fun-filled, joyous (and big-ticket) fundraising gala. This year it was a Netathon, entirely online (and free, though with frequent requests for donations), available on YouTube through September 17. There was still much fun in the dozen performances, starting with a hyperactive Zoom version of “The Telephone Hour” from Bye Bye Birdie sung by 11 members of the original cast of Hairspray, including Harvey Fierstein and Jackie Hoffman. 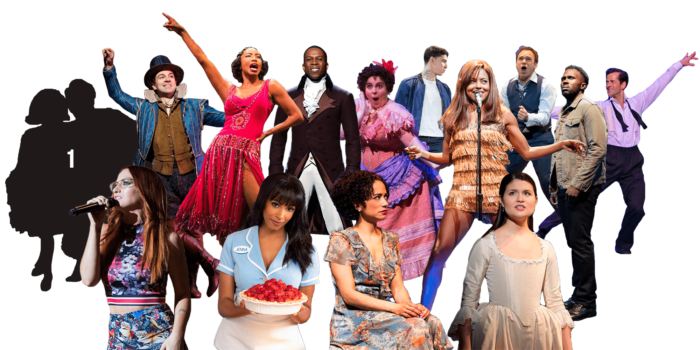 See photos and the video on NewYorkTheater.me

But, to MCC’s credit, the concert acknowledged the dark period in which we’re living more explicitly than other recent group shows. They partnered with the recently formed Mental Health Coalition and included some public service announcements.

There was MCC’s MC for the evening, co-artistic director (and famed casting director) Bernie Telsey,   standing in the darkened theater on 52nd Street that they opened just last year, at considerable expense.

MCC also went further than most in fashioning an event that fit the medium. A preshow offered “Miscast Rewind,” excerpts of greatest hits from past Miscasts: Katrina Lenk’s “If I Were A Rich Man” accompanying herself on violin; The Schuyler Sisters performed by three young boys, that has gotten some ten million views as a standalone video on YouTube.

There was quick flashy editing of title cards and photographs to a drumbeat, interludes with Tweets from fans filling the screen in real time, and an effort to turn some of the songs into humorous music videos.

Robert Fairchild, ballet dancer and star of “An American in Paris,” is shown moping about in his cramped apartment before he sings “If They Could See Me Now” from Sweet Charity, eventually dancing it up on the roof. Rob McClure, congenitally congenial-looking, portrayed Mrs. Lovett singing The Worst Pies of London from Sweeney Todd, while madly slopping around dough in his kitchen. 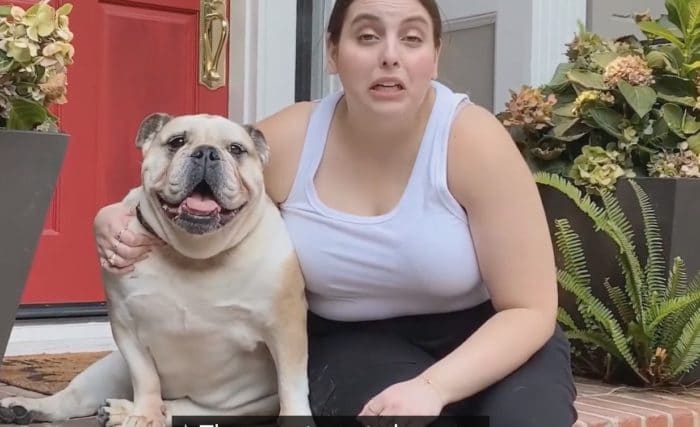 Beanie Feldstein sang Dancing Through Life from Wicked, first accompanied by Jackie the bulldog on her stoop (he didn’t sing), then by Kristin Chenoweth on her smart phone (she did), until Feldstein finishes, masked, with a soft shoe in her driveway.

But the creative team was smart enough to know when a performance required simplicity and a sober tone. For “You Will be Found” from Dear Evan Hansen, there was a split screen showing Lauren Ridloff (Children of a Lesser God) signing the song while Ingrid Michaelson (Natasha, Pierre and The Great Comet of 1812) sang it.

The show included two back to back swoon-worthy ballads: Phillipa Soo (Hamilton) singing Emile’s song “Some Enchanted Evening” from South Pacific and Isaac Powell (West Side Story) singing  Éponine’s song “On My Own” from Les Miserables.

Norbert Leo Butz managed to straddle tones, first telling us he’s been on Miscast five times, “which is five times less than the times I’ve been miscast in my career” – one of several bada-bada-boom jokes he tells, each time resulting in one of those old ghost TV signals to indicate he’s been yanked off the air. But when he finally picked up his guitar and started playing and singing “I Don’t Know How To Love Him” from Jesus Christ Superstar, it was heartrending, even though it meant he was Mary Magdalene and was singing lyrics like “I’ve had so many men before.”

Not every number in Miscast struck me as miscast.

There was a sweet duet of the Human Heart from Once on This Island sung by the married couple Leslie Odom Jr. and Nicolette Robinson…who met while working on a production of the musical.

And Adrienne Warren sang “Before the Parade Passes By” from Hello Dolly so spot-on that I thought she’d be perfect as Dolly Levi. So much so that I contacted Xavier Rubiano, a casting director I recently interviewed who had told me he was a fan of the show.

“I agree with Adrienne Warren that she’s too young for Dolly,” he said, reminding me that that was her argument for its being appropriate for Miscast (because inappropriate for her.) “But,” he added, “it made me excited for the revival in 20-30 years to see her play that role.” He also mentioned Caissie Levy in the pre-show performing Shiksa Goddess in “The Last Five Years.” When he saw that, he thought “there should be a major production of a gender swapped Last Five Years, like Company. I imagine we’ll see more of that in the future.”