Steam Punk as a style launches viewers into a futuristic universe while it casts a glance backwards nostalgically to a simpler, more elegant world. Miranda: A Steam Punk VR Experience creates the alternative-futuristic setting through animation and virtual reality technology to deliver a short opera by Kamala Sankaram, and it’s one of the freshest, most inventive pieces to answer our needs in the time of Covid. 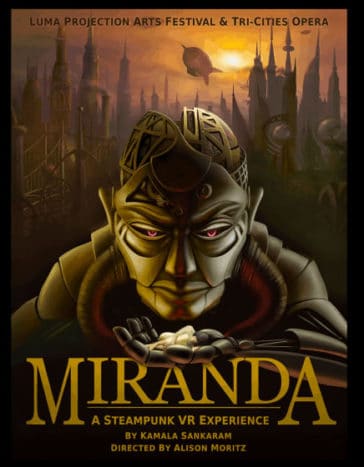 Artist Diego M. Martinez has created the tension between “futuristic” and “nostalgic” environments in the first few minutes as the audience “enters” and “walks around” an empty room, wood floors, bulbous steam pipes and strangely shaped windows. He allows time for us to become immersed.  The curved bullet-shaped walls are reminiscent of a submarine in Jules Verne’s classic science-fiction tale Twenty Thousand Leagues Under the Sea.  Outside this hull one can espy glimpses of dark waters, and our “submarine” passes what remains of a skyscraper civilization, now half-submerged.

As if to charge up the visual dystopia, D.A.V.E., a leather-suited host enters. Part action figure, part circus barker, the computer-generated figure introduces the “game” we are playing in what now looks like a round court chamber, banked by rings of seats with the most curious “audience” that look like rows of nautilus shells.  “Ladies and gentlemen,” calls out this figure, part ringleader part judge.

We become part of this audience summoned to hear Case No. 112278. Miranda has been murdered. Three suspects have been rounded up. We have to choose whether we will participate and abide by the rules: we must determine the murderer. It forces our attention.

Sankaram’s musical palette is eclectic. Host D.A.V.E. sings in a rock style backed by squealing electric guitars.  Sankaram mostly writes for a small classic ensemble of clarinets, saxophones, violins and cellos. For Scene 2, an interior (study), Sankaram uses strings in a tango to re-enact Miranda’s search and finding of a mysterious clue that unsettles: 1 in 10 people have died.  Soprano Leela Subramanian fulfills the voice of Miranda and throws herself into the difficult score. Sankaram cranks things up further when the three suspects join together in a trio. Technology may have tripped things up here but I found this writing somewhat muddy.

I loved the variety of the depiction of the 3-D characters, realized by Juan Caratino and Alvaro Arias.  They conceive Miranda as mostly head in the shots, like an emoji. Cor, the fiancé, dressed in a white suit, leaps about quite a bit and is the hardest to pin down. Is he, as he says, only doing everything for his fiancée or is he the slipperiest of characters?

The Mother is dressed elegantly in a floor-length dress that suggests a sari, a nice nod to Sankaram’s cultural origins. Miranda’s father is the least developed as a separate figure but does seem most interesting in what he might know and why he might know it.

I’ll admit that these generated figures that seem ever to float through the space create at times a somewhat disturbing experience to this non-gamer.

The length of the piece seems both just right for this experiment and, somewhat sadly, fitting the attention span of today’s audience taking in virtual art.  I certainly wonder if, for as long as we are living with small screen as our single performance medium, two- or three-act operas classic operas can endure. Coming in at considerably less than one-half hour, Sankaram’s work can only introduce themes and musical colors, and  most certainly has to jettison complexity and build of characters.

The best dramatically written scene is when Miranda as a ghost confronts Cor. “Isn’t there something you want to tell me?” she sings.  His reply is more chilling in its paternalism than comforting,” Haven’t I always kept you safe? There are things you don’t need to worry about.” How I wish this scene could have been explored fully.

It does feel as if the courtroom drama is over too soon.  But this is what gives it its eerie lingering power: this headlong rush to assume guilt and find a murderer makes us all culpable of participating in what may be a kangaroo court. What other secrets have been bottled up in this world?

As creative artists in theater and opera continue to experiment with how to deliver content and performance experiences. Miranda: A Steam Punk VR Experience has boldly set a course that can be explored more and offers rich opportunities of how to reach audience in this new world.

Susan Galbraith received a BA in English and Drama from Tufts University, graduating summa cum laude and Phi Beta Kappa. Settling in Minneapolis for a time, she earned an MFA from the University of Minnesota, founded a theatre company, Performers Ensemble, and also collaborated with Prince on writing songs and the first draft of Purple Rain. Susan moved to Boston where she was part of Boston Shakespeare Company’s acting company under Peter Sellars. Since 1991, she has made D.C. her home where she has enjoyed the opportunity to write plays, direct, act, and produce. She helped co-found Alliance for New Music-Theatre and collaborated on original works across disciplines, styles, and cultural expressions of music-theatre. For the Alliance, Susan co-wrote and directed Sandaya: Burmese Lessons and has collaborated with the Czech Embassy on several works inspired by great Czech writers, including Vanek Unleased and an adaptation of Kafka’s Metamorphosis. She has collaborated with composer Maurice Saylor on adapting Karel Capek's R.U.R. (Rossum's Universal Robots) as a retro-futuristic cabaret musical, and, with composers Dawn Avery and Milad Yousofi and co-writer Yalda Baktash Women has developed Troy/Voices from Afghanistan, a music-theatre work featuring the stories of Afghan women and American female veterans. She is grateful to Lorraine Treanor and the opportunity of DCTheatreScene to jump into the privileged audience seat from time to time to learn from and be inspired by her colleagues making theatre and opera in the Greater Washington area.