Joel Grey sings “Give My Regards to Broadway” – in Yiddish. And he’s not alone among the 50 performers of the Folksbiene Chanukah Spectacular, a fast-moving, entertaining 80 minutes that is ostensibly a celebration of the Festival of Lights. It is available for free online through December 12th, which is the third day of Hanukkah (the more common spelling.)

There is a lively medley of traditional songs for the Jewish holiday at the very end of the show. But much of this Spectacular offers Yiddish versions of a wide range of Broadway and American show biz standards (“Over the Rainbow,” “There’s No Business Like Show Business,” “Hooray for Hollywood,”) traveling coast to coast (from “I Left My Heart in San Francisco” to “New York, New York”) and around the world (including singers from counties as likely as Israel and as unlikely as Japan.) 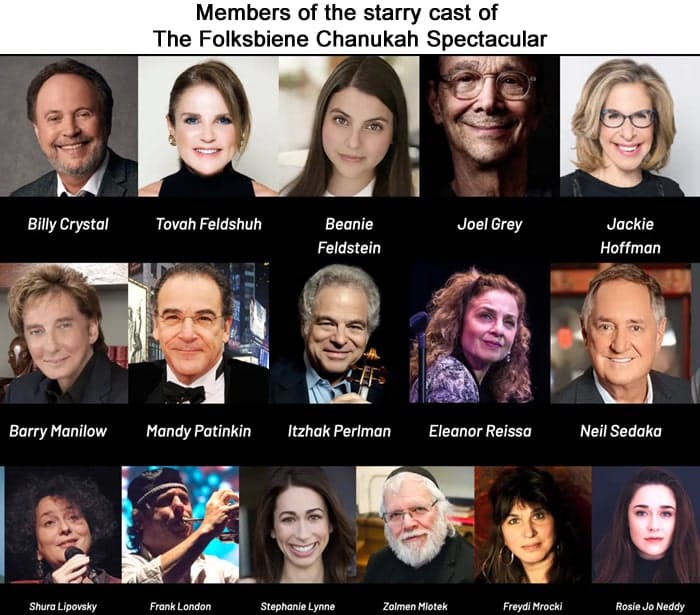 This seems apt for the National Yiddish Theatre Folksbiene, the 105-year-old company whose popularity suddenly exploded two years ago with its production in Yiddish version of Fiddler on the Roof, directed by Joel Grey.

“They have taken a language that others tried to destroy, resurrected it, and made it live like nobody’s business, “ Mandy Patinkin says, the first of more than a dozen celebrities praising folksbiene; this celebration doubles as a fundraiser.

But as host Adam B. Shapiro tells us, “you can’t spell ‘fundraiser’ without ‘fun’.” So, among the testimonials, by everybody from Carol Burnett to Jake Gyllenhaal, are many riffs on the joys of Yiddish. Billy Crystal describes Yiddish as “a combination of German and phlegm,” but also tells the story of his grandfather translating King Lear into Yiddish, and he and his grandmother touring with it. Barry Manilow talks briefly about his forthcoming musical “Harmony,” which tells the story of the Comedian Harmonists, an immensely popular singing group in Germany in the 1920s and 1930s that was made up of both Jews and Gentiles. “Harmony” was planned for the current season at folksbiene, but has been delayed because of the pandemic. (The shutdown hasn’t completely shut down folksbiene: As associate artistic director Motl Didner points out, there have been some 70 online offerings since March, from concerts to classes.)

The Spectacular presents scenes from folksbiene’s previous productions, such as the concluding medley of Soul to Soul, a theatrical concert that explores the parallels between African American and Jewish history and musical tradition

It also nods to one of the mainstays of Yiddish culture, presenting a Laugh-In like series of Yiddish jokes and Yiddish ditties

There are threaded throughout the Folksbiene Chanukah Spectacular some pure beautiful Yiddish melodies. Some are charming, many rousing.  Some are melancholic. “Every Jewish celebration has to have a few tears,” says Steven Skybell, who played Tevye in Folksbiene’s Fiddler. Then he sings “The World and I.” (English subtitles: “Since we are both suffering, the world and I, the world has no place to come to, and I have no place to go…”) It is in Yiddish, but I suspect it captures the world for most everybody at the end of 2020.