The Boys Next Door by Tom Griffin is the kind of play that makes you laugh in an uneasy way. One question this wonderfully acted production asks is pointed and direct — can a play about four mentally challenged men living together in a small apartment be humorous without the focus of the joke being the handicap? The answer in the case of The Boys Next Door is yes. This play is not hilarious because the characters are mentally challenged but instead because they say and do things that are comical. Jeff Keenan who directed last season’s Colorado Catechism for Journeymen Theater is able to balance the laughs and poignant moments in such a way that there are very few times that the laughs feel misplaced. The Boys Next Door is truly inspiring and thought provoking–the characters seem to become your long time friends by the end of the show. 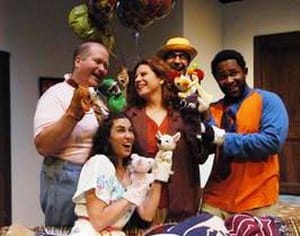 The play revolves around the lives of the four previously mentioned men living in a group apartment and their social worker Jack (Deborah Kirby). The men, Arnold (Cecil Baldwin), Norman (Don Prather), Lucian (Dallas Miller) and Barry (Michael Propster) all have varying disabilities ranging from mental retardation (Norman and Lucian) and depression (Arnold) to schizophrenia (Barry). The play questions how we care for our developmentally challenged citizens with four sub plots, Jack’s burn out and change of career, Barry’s abusive dad visiting after nine years, a hearing for Lucian to determine if he is capable of living on his own and finally a budding romance between Norman and his dance partner Shelia. We are left at play’s end to contemplate the questions asked and their possible answers.

The performances in The Boys Next Door are fabulous from Dallas Miller’s tender portrayal of Lucian to Cecil Baldwin’s jumpy Arnold. Don Prather is hilarious as Norman who must battle a love for donuts that is unrelenting. The most haunting performance was Michael Propster’s golf obsessed Barry whose breakdown after an abusive visit from his father is heart wrenching. Becky Peters who plays Sheila, Norman’s love interest, brings quite a few smiles and Deborah Kirby as Jack works well even though the part was written for a male. I found myself caring about these characters not because they were handicapped but instead because they were just likeable people and I think that is what Griffin is trying to convey — the handicapped just want to be thought of as members of society and not someone to be pitied or felt sorry for.

Most of the play takes place in the apartment the men share and it is functionally staged by Ryann Lee. The lighting design by Brian Miller provided smooth transitions between indoor and outdoor scenes that were staged to the left and right of the apartment setting. The excellent costumes by Melanie Dale had a quirky retro feel for Arnold, Barry and Shelia and an ill-kempt quality for Norman and Julian.

Our ability to provide services for handicapped citizens amidst budgetary cut backs has many of us asking tough questions. The Boys Next Door does not answer these questions but tactfully and with touching humor provides a glimpse of how much of our daily lives we as a community take for granted. During the scene when Lucien is before a committee to determine if he needs assisted living there is a frozen moment where Lucien comes out of character.

In a chilling discourse he says: “I stand before you a middle-aged man in an uncomfortable suit, a man whose capacity for rational thought is somewhere between a five-year-old and an oyster. I am retarded. I am damaged. I am sick inside from so many years of confusion, utter and profound confusion. I am mystified by faucets and radios and elevators and newspapers and popular songs. I cannot always remember the names of my parents. But I will not go away. And I will not wither because the cage is too small. I am here to remind the species.. of.. the species. I am Lucien Percival Smith. And without me, without my shattered crippled brain, you will never again be frightened by what you might have become. Or indeed, by what your future might make you.”

It is an understatement to say I was moved. If Journeymen Theater can force tough issues into the limelight while providing some light hearted humor a great service has been rendered. See The Boys Next Door — laugh and enjoy a great play, then ask yourself “Who is taking care of Lucien?”