Celebrate the life of Gilbert Mead This Monday Evening 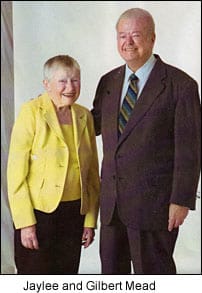 This Monday, September 17th, a very special performance titled Gil Mead: A Celebration. will be held at the Kennedy Center to celebrate the life of Gilbert Mead, gentle man,  NASA  physicist, cultural philanthropist, who died this past May of non-Hodgkin’s lymphoma.  Together with his wife Jaylee Mead, they funded plays and musicals, and have gifted future generations of theatre-goers with major donations to The Kennedy Center’s Millennium Stage, Studio Theatre, Signature Theatre, Woolly Mammoth Theatre Company, Olney Theatre Center, and the Mead Theatre Lab at Flashpoint.

One of the first theatres which quickened the imaginations of the Meads over 30 years ago was Arena Stage. When the new Arena Stage facility opens in 2010, it will be known as Arena Stage at the Mead Center for American Theater.

There is much to celebrate in Gil Mead: A Celebration which begins at 6 pm in the Kennedy Center Concert Hall.  Dozens of performers, backed by a 25 piece orchestra under the direction of George Fulginiti-Shakar and Jon Kalbfleisch , will pay tribute to Mr. Mead’s life through song, dance and remembrances. We know he has many personal friends within our readership, and hope you will be able to attend.  It is free and open to everyone.  No reservations are required. The program will also be available for viewing on the Kennedy Center’s Millenium Stage archives.