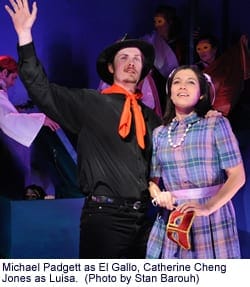 “Deep in December, our hearts should remember.  And follow.” It’s December and definitely a perfect time to “Try to remember” this classic show.  The original off-Broadway production ran for over 41 years and 17,162 performances.  It is also one of the most frequently performed shows ever, and with good reason.  This classic story of romance and fantasy has stood the test of time and the Bay Theatre shows why.

The narrator, El Gallo (Michael Padgett), introduces the cast: a boy (John Dellaporta), a girl (Catherine Jones), the boy’s mother (Barbara Pinolini), the girls’ mother (Nicole Halmos) and a wall (the narrator’s assistant, The Mute, played by Genevieve James).  The mothers secretly stage a family feud and build the wall to entice their children to fall in love.  They hire El Gallo to stage an abduction to seal the deal.  El Gallo hires two down-on-their-luck actors, the Old Actor (Richard McGraw) and the Indian (Rob Shand) to help him with his staged abduction.  Happy ending…until the young lovers find out it was staged.  They part with the boy going off to find adventure and the girl to have an affair with her bandit, El Gallo.  After misfortune follows, the boy returns and the lovers reunite for a true happy ending.

Bay Theatre production is outstanding.  The cast have excellent voices that easily fill the intimate theater space.   Padgett is particularly amazing.  The difference between someone reciting poetry and someone actually interpreting the poetry can be huge.  The same can be said for Padgett’s interpretation.  I have seen dozens of performances including two at the original Sullivan Street Playhouse and I can barely remember as astounding a performance as Padgett’s.  He truly makes the audience understand the meaning behind the pretty poetry that the narrator uses to frame the scenes.  Add in his wonderful baritone voice that just rolls through this music and it is one of the best performances of this role I have ever seen.

Originally the show called for two fathers, but it has been done with every possible combination of mothers and fathers.  Pinolini and Halmos are particularly well matched as the mothers.  They have a wonderful chemistry and sense of timing that suits them and the roles well.  Of particular note is Halmos, who is the first performer I have ever seen who made me think that the music was written for a woman rather than a woman singing music originally written for a man.  Her voice was beautiful and she adapted the music so well to her own style.  Additionally, her facial expressions and body language added so much nuance to her performance that she captivated the audience in all of her scenes.  Jones was perfectly cast as the young girl.  She added so much more depth to the character than most actresses in this role.  In addition to the young woman in a fantasy romance, she was also a young adult just bursting to life like a flower set to bloom.  Her voice was lovely and soared in each of her numbers.  The Mute is traditionally a small part that augments the show without drawing much attention to the character.  However, the director allowed James to develop a wonderful character for the Mute that added so much more to the show.  James participated in a number of scenes and her physical skills were up to the task of making a character with no lines particularly interesting and amusing.  She was a delight to watch and complemented the cast and the story very well.

Dellaporta as the boy has a fine tenor voice that made his songs stand out, particularly his duets with Padgett and Jones.  However, his acting was a little stiff and tended to diminish the scenes somewhat.  McGraw was far too young for the role of the Old Actor and was not able to adequately convey the old age –  hence some of the gags fell flat.  Although he kept the audience in stitches, he did so by going for laughs that did not necessarily keep in context of the show.  However, Shand as the Indian was adept at the physical comedy and was able to keep his humor in context and definitely helped their scenes.  Typically, the Indian’s biggest moment is his “death scene”, but Shand was able to follow this with an absolutely hysterical post-death scene (with James).

Director Lucinda Merry-Browne should be commended for her excellent vision.  Too often this show can be old and stale, but she was able to find many ways to keep the show fresh and new.  She wisely made a few changes to the script ranging from inconsequential word changes to some that definitely helped.  The show often suffers from a dated reference to “rape” using the classic definition of “the act of seizing and carrying off by force.”  However, many modern audiences gravitate towards the more common contemporary meaning of a violent sexual act.  Merry-Brown ably inserted several lines before the classic rape song “It Depends on What You Pay” that quite smoothly defused the emotional tension that the word evokes and allowed the song to entertain as it was meant.  Her blocking also helped keep the show moving smoothly so that it never stagnated.  Set designer Ken Sheats created a very innovative black box stage that also kept the pace on the show moving well.  His two level stage including a box that could be a pedestal or flip to be a small thrust from the upper level into the lower level was clever.  Two folding floor panels allowed for a divide between the two halves of the stage to create the wall that divided the two mothers’ gardens.  And a very clever set piece in the corner that resembled a large piece of cat furniture allowed many cast members to remain on stage and out of the way as necessary plus doubling as the tree.  Lighting designer John Burkland contributed a number of key lighting accents that complemented the show well.  However, some footlights did not quite produce the desired effect and were somewhat distracting for the patrons in the front two rows of the intimate theater.

Definitely one of the best productions of this show I’ve seen in some time, so follow your heart to Annapolis to see this excellent production.