With a pair of plays by Caryl Churchill, Lumina Studio Theatre looks to tap into the spirit of our times.

“Top Girls… is sort of women on top, and Fen is sort of women on the bottom,” says David Minton, the company’s artistic director, who is also directing this show.  “Fen is really about… wage and labor fairness issues” that Minton recognizes as being in the zeitgeist right now. 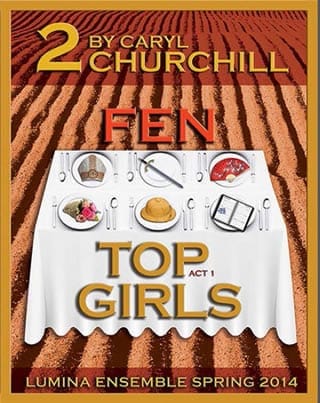 Lumina does not choose its season based upon how best to fit roles to its large ensembles of up to 40 actors, nor, as Minton puts it, do they just say “gee we haven’t done Hamlet in a while.”  They prefer to look at “what’s going on in the world, what ideas haven’t we explored.”

Thus, this season contains the diptych of Churchill pieces – Top Girls from 1982 and Fen from 1983 – that are still relevant today.  (Along the same lines, the company’s upcoming Shakespeare production of Henry V – which will be retitled Brother Hal – will conceptually set the play amid the 1960s labor movement in Flint, Michigan.)

“I think for any young woman in this day and age who’s interested in a woman’s place in the American culture and society,” says Minton, what Churchill’s works talk about is still quite pertinent.  “That battle – if it can ever be won – it hasn’t been won yet, and I think a lot of young women [would say] ‘yeah, it’s our time.’”

Top Girls concerns, at first, a surreal dinner party hosted by a successful businesswoman with various historical and fictional women of note in attendance, including Pope Joan and explorer Isabella Bird.

“[While] all these women have succeeded in their own ways,” Minton says, “how much have they had to submit to the ‘system’ in order to make it, or how much have they broken away from it?  It’s not just like, you know, some sort of blind tribute to women who’ve made it… [Churchill] asks questions, she challenges assumptions about successful women, [and] she does it in such a playful way, such an engaging way.”

Meanwhile, Fen, which gets its title from a poor farming region in the east of England, is “like poetic realism – [it’s about] these women who have these tough lives, but done in this beautiful poetic way.”  Minton describes the women portrayed in the play as “basically serfs… who really had to struggle to survive… making it in a man’s world.”

This production is Lumina’s annual Ensemble show, featuring a smaller and older cast than their regular Shakespeare productions.  There are twelve actors in total, all women, six of whom double in both plays while the other six appear only in Fen.

At Lumina, Minton handles all the casting directly – there are no auditions.  “It’s really like a company,” he says, “I know what they can do.”

This will be the final show with Lumina prior to college for some of the young actors.  “For them I think it’s a very exciting thing to explore characters from a master storyteller like Caryl Churchill,” says Minton.  “And the depth of characterization is so amazing.”

Minton goes on to say that he feels he has learned a lot from his cast of young women.  “I always do [learn from the actors].  I guess [with the Churchill plays] I’ve learned that what I assume to be a good liberal’s view of feminism isn’t necessarily their view… I can’t really give you any examples but I find myself sometimes challenged by the actors in ways that I realize my thinking is a little… a little older than theirs.”

Given the subject matter and the surreal nature of Churchill’s work, it’s no surprise that, in contrast with Lumina’s big Shakespeare productions (such as their recent Kabuki Coriolanus ), for this pair they have “no concept,” according to Minton.

“With Churchill, I really don’t have to do much, it’s all there… Top Girls is really laid out… Fen I’ve probably taken a little more liberties with some of the music I’ve chosen for the play, and some of the moments of poetic focus, that really work with the script in, I think, a really respectful way.”

One choice Minton made is to have the actors change between their multiple characters in full view of the audience, by putting on or taking off a wig or small costume piece onstage.  As well, Top Girls will feature restaurant seating for about one third of the audience.  The tables will be pushed back from Fen, to allow for a large painted canvas to be rolled out, depicting the titular swampy area.

For another contrast between the two plays, Minton notes that, “Top Girls [will be played] full of props, [but] Fen [will be] no props.  We brought in Mark Jaster to work with our young actors… They’re picking potatoes out of the ground, they’re sorting onions… and all these things are mimed.  It’s just a choice we made not to use any props… we wanted this to be theatrical, for people to see the actors creating these characters.”

The adult-level challenges abound for the young cast.  Besides the miming, the actors in Fen are learning the specific East Anglian accent spoken in the region.  Meanwhile, the ones in Top Girls have to handle a somewhat unexpected complication – eating a multi-course meal.  Churchill is specific about the courses consumed during the restaurant scene.

Asked if the young actors were excited at the prospect of getting to eat onstage, Minton says, “Not as much as you’d think!  They don’t dislike it, but they have lines that they have to say, and it’s a prop, actually, that you have to handle… Their courses that come out, if you don’t at least get some way through it, it doesn’t work; to make the drunkenness work by the end of the play, you need to be hitting the glass; [you need to be] talking to the waiters… and they have these monologues that just go on; so it really is like a group of people yakking to each other at a restaurant.  But,” he says, for the actors “it’s a lot to think about… it’s technically, it’s subtly, a very challenging play.  The idea [of eating onstage]… was more attractive for them than the reality.”

It is Minton’s preference, and Lumina’s modus operandi, to treat the youth company no different than adult actors, and not to shy away from all these challenges.  Minton feels that this way they are able to find new angles on the art.

FEN AND TOP GIRLS
March 21 through March 23
Lumina Studio at
Round House Silver Spring
8641 Colesville Road
Silver Spring, MD 20910
Tickets: $15 for adults, $8 for retirees and under 18
Details and tickets   [/ezcol_1third]

“Some education goes on, it has to, because [the performers are] young,” he says. (The youngest, 8-10 years old, are the Players; next come the Classics, 11-15 years old; and the eldest, roughly 15 to 17, are the Guild.) “But they do bring something, I’ve found, that is unique, and that does add to the body of performance art that we older types – who have been around the block a lot as actors – can’t quite do… kind of a freshness and a vitality, and an enthusiasm.”

“As long as we understand that these kids… they are our audiences of tomorrow… doing serious youth theatre like Lumina’s doing is a step in the right direction,” he continues.  “I’m not saying we’re the answer, but efforts like this… everyone I talk to is saying how do we reach this new demographic, and this is our way.”

“I think Lumina can be a transformative experience.”

Brett Abelman is a lifelong DC-area resident and a teller of stories. Brett is an alum of The Welders 2.0 thewelders.org, through which Brett's original play Switch debuted in 2018 - and is excited to see what Welders 3.0 will do. Brett's work includes the collaboratively devised Capital Fringe hits Play Cupid (2016) and Balloon Plays (2014) plus other previous Fringe productions. Brett's full-lengths To The Earth (virtually, 2020) and Curiouser (2014) have had developmental presentations with Spooky Action, in addition to other developmental and excerpt readings with Pinky Swear, District Dramatists, and elsewhere. Other short works of Brett's have been produced by Rorschach Theatre, LiveArt DC, Nu Sass, Annex Theater, Theater J, DC 1-Minute Play Festival, Q Fest, Beltway Drama Series, with the dearly missed eXtreme eXchange DC, and more. Brett also acts, works backstage, plays drums, writes features and criticism for dctheatrescene.com, and occasionally hires out as a professional organizer (ableorganizingdc.com).