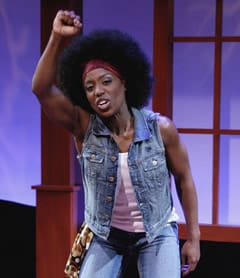 An Interview with Felicia Curry
By Joel Markowitz

She sings. She acts. She climbs up the sides of houses. She does full splits. She is Felicia Curry, a powerhouse of talent, and one of the nicest actresses, singers and human beings I have had the privilege of knowing.

I asked Felicia about her very busy year – her many performances, her experience at Toby’s-The Dinner Theatre of Columbia where she was nominated for two Helen Hayes Awards for Godspell and Aida, and her very physical performance in Imagination Stage’s production of The Araboolies Of Liberty Street.

Joel: You have had a very busy year, what shows have you appeared in and what is coming up for you?

Felicia: In 2007, I started the year playing Violet in the Kennedy Center’s national tour of Roald Dahl’s WILLY WONKA. I left in Jan. and returned at the end of May. I immediately started working on Imagination Stage’s production of THE ARABOOLIES OF LIBERTY STREET. In the midst of ARABOOLIES, I started working on MetroStage’s remount of THREE SISTAHS, (photo is above) which closes Sept. 9th. At the end of Sept. beginning of Oct., I will be performing in PETITE ROUGE at the New York Musical Theater Festival. In Oct., I start rehearsals for THE PHANTOM TOLLBOOTH at the Kennedy Center, which opens in Nov.

Joel: What’s it like to be on the road with a show?

Felicia: What I really liked about being on the road was the chance to perform our show in different venues, explore new cities, see the country, all the while doing what I love to do.

Joel: Any disappointments this year with the shows you appeared in?

Felicia: No disappointments at all this year. I have had a tremendous year as a performer and I am grateful for every experience. I have been a part of several incredible productions to date, and I am looking forward to another amazing experience in TOLLBOOTH. 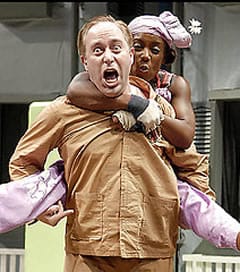 Joel: Can you tell us about Araboolies and your role in the production?

Felicia: In ARABOOLIES, I play Araboolie Kid. Araboolie Kid is the character that introduces the audience and the kids of Liberty Street to the Araboolies and their way of life. ARABOOLIES is about acceptance and understanding of all people.

Joel: I know actors are supposed to be “flexible,” so where did you learn all those gymnastic moves?

Felicia: I took gymnastics as a child, but most of what you see in the show comes from several years of cheerleading. I was a middle school, high school, and collegiate cheerleader, and gymnastics is a big part of the sport.

Joel: Which move gave you the most trouble?

Felicia: Climbing the houses and bringing the boolanoola balls to life were probably the ‘moves’ that took a little more time to develop. We all had to discover how to move up and down and around the houses quickly and within the action of the scene. Learning to move the large boolanoola ball in a way that makes it look like it is alive was difficult but worth every dropped ball when I see the amazement on the faces of the children.

Joel: You have such an incredible voice, so what was it like to appear in a show where you only sang one line (with the chorus)?

Felicia: I have to admit that it was a challenge for me. I am used to telling my character’s story through music and words, and this show required that I tell Araboolie Kid’s story almost entirely through movement and expression. But it is incredibly rewarding when you realize that the audience understands everything you are trying to ‘say’ and you haven’t said a word!

Joel: How did you and the athletic cast rehearse for all the jumping and climbing? Rehearsals must have been hoppin’.

Felicia: Our acrobatic choreographer, Robert Dion, spent several hours with us on how we would move around the stage and on the houses as Araboolies. He helped us to develop movement that specifically spoke to the essence of the Araboolies and the emotion we were trying to express in each moment. The rehearsal process involved several bruises, ice packs, and heating pads. But it was all necessary in order to put on a show that looks smooth and cohesive and most importantly, safe.

Joel: You have been nominated for two Helen Hayes Awards for Aida and Godspell at Toby’s The Dinner Theatre of Columbia. What was the Helen Hayes ceremony experience like for you?

Felicia: The Helen Hayes ceremony is always a treat. What an exciting time for performers in the area to toast to our accomplishments for the year. No words can explain how humbling it is to be singled-out in a region with this much talent. Not to mention, I love getting dressed up!

Joel: Can you talk about your Toby’s experience?

Felicia: I am eternally grateful for my time and experience at Toby’s. Before my first show at Toby’s, I was working at a non-profit in DC. Theater had always been a hobby, but I think I had decided that it would never be anything more than that. It was only after performing at Toby’s, working with Toby that I realized that maybe it was more than just a hobby. Toby helped me develop my craft by giving me opportunities that I may not have received anywhere else. She allowed me to perform with some of the most amazing actors in this area, and to take on some of the most amazing roles of my career. I will always be thankful to Toby for helping me jumpstart my career as a performer.

Joel: You just opened in Three Sistahs at Metro Stage. Can you tell us about the character you play, and how much of your own experiences are in this character?

Felicia: I play Irene, the youngest of the three sisters. She is in her mid-20s at the end of the 60s, and her baby brother was just killed in the Vietnam War. She is militant and angry, but it is all fueled by the sadness and disappointment over the death of her brother and her trying to find a voice in the midst of the chaos in America. As actors, we always use personal experience to motivate emotion in the show, and I think that with everything happening in America right now, and as a 20-something myself, I am taking full advantage of being able to be a character with a voice.

Joel: How do you rest your voice between shows?

Felicia: I honestly don’t do much of anything between shows. I get a meal and then I simply rest my voice and my body, usually do sudoku or a crossword puzzle.

Joel: If you could be something other than an actress, what would it be?

Felicia: I have a degree in broadcast journalism from the Univ. of MD, College Park. If I couldn’t be an actress, I think I would take advantage of my schooling and go into entertainment reporting!

Joel: Any advice for young actors who are just starting out?

Felicia: It’s interesting that you ask me to give advice to young actors starting out because I feel like a young actor myself. I think the most important advice I’ve received has been to continue to study your craft, take classes, read books, and soak up as much knowledge and information from the people you work with on different projects. And remember that this is called show business, so learning to market yourself is extremely important.