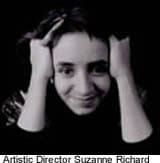 How Open Circle Re-Imagined Songs for a New World

On May 16th and 17th this year, many Jason Robert Brown fans, including myself, swallowed up tickets to see a concert version of the Tony Award Winner’s (for Parade) Songs For A  New World at Strathmore in Bethesda. It had an all-Broadway veteran cast that included Tony Award nominees Laura Benanti, Brian d’Arcy James, and Alice Ripley, and young Broadway performer Tituss Burgess. What a thrill it was to hear and watch Jason Robert Brown tickling the ivories at those two performances. Jason doesn’t tickle -he emotes at the keyboard.

Here’s a description of the show from the Strathmore program:

“Songs for a New World is a 16-song revue that tells the stories of a diverse array of characters in the midst of emotional and physical struggles. Jason Robert Brown takes audiences on a journey from 1492 with the treacherous journey across the Atlantic to America, all the way to the present day, where a young man determines that basketball is his ticket out of the ghetto and a woman whose dream of marrying rich nabs her the man of her dreams, but also a soulless marriage. Originally directed by Daisy Prince (daughter of director and producer Harold Prince), this 1995 revue enjoyed acclaim and a cult following in New York. It is heavily influenced by a broad range of musical genres, including pop, gospel, jazz and classical.”

So, is it sheer chutzpah or sheer brilliance and courage that explains why Open Circle Theatre’s director Suzanne Richard has now taken Jason Robert Brown’s song cycle revue and added a “story” to it?  How did she get the composer to agree? Here’s how:

Joel: When was the first time you heard Jason Robert Brown’s music, and what was it about Jason’s music that hooked you?

Suzanne: Jason Robert Brown’s Parade was first brought to me by James Garland, who is currently playing the African American Soldier’s Friend. I liked the music, but wasn’t sure it was the project for us right then.  In relentless pursuit of the project, James brought me Songs for a New World and the album Wearing Someone Else’s Clothes.  I found this music stirring and passionate and it began to make me think about the soldiers I had met around the downtown Silver Spring area who were recovering from injuries at W alter Reed.  The lyrics and music were incredible and it sparked so many ideas, I just had to sit down and do something with it.

Joel: Can you tell us how you obtained permission from  Jason Robert Brown to make these changes?

Suzanne: After I had made a show out of songs from these two albums and having gotten no response by contacting him through his website, I found that no one in town would give me his personal email.  In frustration, I finally called Eric Schaeffer at Signature Theatre and without blinking, he gave me his address and offered to pass on material to him as they were working together on a performance of Songs at Strathmore.

After not hearing from Jason for two weeks, I got my nerve up and emailed him, to which he responded that since he would not be available to work on the project personally, he did not feel comfortable giving me permission, but hinted that maybe if I did it with just Songs and not the other album, he might be willing.  At that point, I took a weekend and redid the concept just using Songs and contacted him again saying I could do it, but I really wanted to use the song “Over” from the other album as well.  I got the shortest email in the world back, answering all my questions as, “yes, yes, no, no, yes” and I was off to the races!

Joel: Since you have developed a story around his music, why did you decide to give it the same title as his earlier Off-Broadway revue?

Suzanne:  That was at JRB’s request. 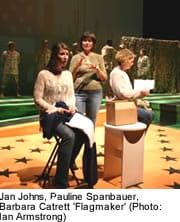 Joel: What’s new about this production, and have you added or taken away any other  songs from the original production?

Suzanne: We added the song Over, as Jason says, just for this production and this run of the production.  And try as I might, I could not seem to work in the song Surbuyana Santa.  This is a delightful song sung in a “torch song” style about Mrs. Claus leaving Santa Claus.   I thought maybe there was a drag queen in the protest movement who could sing it, or the soldiers were sitting around the base doing a drag show a la South Pacific, but nothing seemed to work.

Joel: In your press release for the show you state, “Through Mr. Brown’s music and lyrics, with no added libretto, this concept comes to life.” How do you bring this “concept” to life without adding a libretto or book?

Suzanne: We worked with very specific acting choices, the projections on the screen and when that didn’t make everything clear, we added a small plot synopsis a la an Opera to help the audience along.

Joel: Why did you decide to use 24 actors in this production, when most productions of this show have used a small cast?

Suzanne: First, we wanted to get to hear JRB’s music with multiple voices, which is quite powerful.  Additionally, Open Circle Theatre casts often swell as you add in sign actors to do the sign language…and I just like an epic. 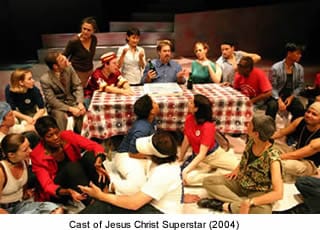 Joel: Have you ever directed a cast this large before?

Suzanne: OCT’s main productions are often this big, Evita had 25 actors, Caucasian Chalk Circle had 21, and Jesus Christ Superstar had 27.  We also find that this allows us to feature the actors with disabilities in the show who may not have as much experience in ways that highlight their abilities.

Joel: Can you tell us how you found the 24 actors?

Suzanne: We held open auditions and they just showed up.  Really, with such a talented cast, we were really blessed.  There were a few returns such as Tosia Shall, JP Illaramendi, Elver Ariza & Debra Buonacourssi and a few returning that we had pre-cast such as Rob McQuay and Warren Snipe and James Garland was a newbie to us but as he had brought the project to us and once we heard him sing, there was no question.

Joel: What’s your favorite song in the show and why? 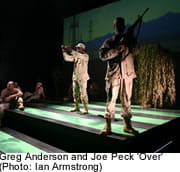 Suzanne: That is an incredibly difficult question because all of the songs are so wonderful.  But I guess, sentimentally, I have to go with Over because I fought so hard to include it and because it still makes me cry.  The beauty of it is that as you listen, it takes you a little time to realize that the words are actually that of a soldier who had been killed in combat singing.

Joel: Will you publish this version, and will Jason Robert Brown allow this version to be staged elsewhere?

Suzanne: There are no plans to do that at this time and JRB was very clear that this would be the only run of this production at its inception.

Joel: Is Jason Robert Brown coming to see the show?

Suzanne: Unfortunately, JRB will be in Europe for the entire run of the show and has said he cannot come.  But maybe if enough people flood his website telling him to come, he could grab a flight back <wink>, but I wouldn’t hold your breath.  He has been so gracious about the whole thing, I am sad he won’t be here, but I certainly understand.

Joel: What do you want your audience to take with them when they leave the theatre? 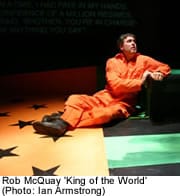 Suzanne: I want them to take an appreciation of the music, of course, but even more, I want them to keep the thought that our military men and women are over there fighting, dying and coming home injured.  Whatever you feel about the war, these men and women need you to think of them, help them, and most importantly, not avoid thinking of them, but confront your feelings about the war and the sacrifice they are making.  We aren’t having to make sacrifices here at home, they are making them for us, so let’s not forget about them and their families.

Joel: Tell our readers about Open Circle Theatre, and then how long the show is running, and how they can buy tickets to the show.

We are planning a great show, but ticket sales cannot cover all our costs. Please consider making a tax-deductible donation to support this exciting and innovative production.  Full details are on our website.