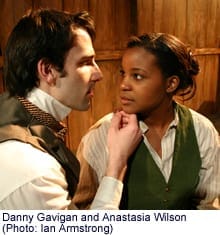 Mad Breed reminded me of the last time I greeted news of a brand-new play with a good deal of skepticism. I didn’t think one of my favorite books, a rich tapestry of complex characters and themes, would translate to the stage. Well, I was wrong-thank goodness, because Wicked is now one of my favorite musicals.

This time around, I was skeptical that a farcical comedy about a young John Wilkes Booth, a minstrel performer, and William Shakespeare-all co-mingling in a barn, of all places-could even mildly entertain. Well, thankfully I was wrong again. Mad Breed may not join my list of theatrical favorites, nor is it likely to win a Tony, but playwright Jacqueline E. Lawton deserves much attention and respect for her amazing originality.

Active Cultures Theatre’s mission is to produce “smart and juicy theatre for a diverse, multigenerational audience.” Mad Breed is certainly smart: Lawton imagines a youthful scenario that helps shape the man who would one day assassinate Lincoln. But this play is actually more about Wilkes’s older brother Edwin, who falls in love with a black woman-quite a taboo relationship in 1851 even for a Booth (except for Wilkes, the famous stage family was well known for its abolitionist sentiments).

“Juicy” may be more of a stretch-yes, we have a scandalous love story and racial tension, but because of foreshadowing and the known history, the outcome is a bit predictable. Diversity is a given here, with a free African American woman, Adah Rose Francois (Anastasia Wilson), not only trying to pass as a boy, but making up in blackface so everyone would assume she was white, all so she can perform in a traveling minstrel show. But the troupe discovers her true identity and leaves her behind in Maryland, where she meets Edwin and then the rest of the Booth clan, in the midst of wedding preparations-including rehearsals of a love scene from Shakespeare’s Much Ado About Nothing. Adah writes a new scene, a minstrel version of the play within a play in A Midsummer Night’s Dream.

This is where Lawton’s creativity truly astounded me. Pyramus and Thisby (Edwin and Adah) are kept apart by their different skin colors, as symbolized by the Wall’s new identity as the Mason-Dixon line. This and other adaptations hint at pure genius, so I was surprised and impressed to learn after the show that this was the easiest part of Mad Breed for Lawton to write.

Mad Breed exemplifies why I love theater. It did far more than hold my attention for an hour and a half: it defied my expectations, it made me laugh, and it sparked my curiosity about an interesting subject straight out of history.

This play is intended for ages 10 and up.