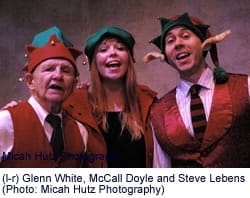 There was a time when the televised Christmas specials were amongst the most anticipated parts of the season. Anyone over the age of 10 probably remembers the Perry Como, Bing Crosby or Bob Hope Christmas shows.  Today, most people don’t watch the classic Christmas musical variety shows, but American Century has re-created one, and it’s worth a trip to see it and bring the family.

An American Century Christmas is a walk down memory lane of American Christmas as hosts Mick and Patricia Tinder welcome the audience into their “home” to share holiday memories.  They are joined by the entertaining ensemble: Ann DeMichelle, McCall Noelle Doyle, Kathryn Fuller, Adam Juran, Scott Kenison, Steve Lebens, and Glenn L. White.  Bill Gordon, the sound engineer, joins in with his wonderful broadcast voice  without ever stepping on stage, but the show would not be complete without his wonderful announcer and voiceover work.  The show is a combination of skits, songs and stories from American Christmases the last 70 years or so.  Such classics as the tale of “Yes Virginia, There is a Santa Claus”, It’s a Wonderful Life, and “The Littlest Angel” truly touched the audience.  And there were over 70 Christmas tunes sung in whole or in part throughout the show.  Some especially memorable melodies included Alvin and the Chipmunks, the show-stopping hilarious “The Twelve Pains of Christmas”, “The Marvelous Toy” and “Do You Hear What I Hear.”   There was even audience participation where astute audience members won prizes for answering Christmas trivia questions.

Although the Tinders “hosted” the production, this was truly an ensemble show.  And the ensemble was strong and wonderful.  Each performer had a few moments or songs to shine individually while all sang beautifully in the group numbers including some truly spectacular multi-part arrangements.  While the cast uniformly performed well, there were a few standout performances.  Scott Kenison provided rich physical acting, comedic timing and energy.  He was hysterical as the child who was excited to be a snow angel, lip-syncing one of the “sisters” from White Christmas, and as the light hanger in “The Twelve Pains of Christmas”.  Adam Juran’s exceptional voice added a lot to the show.  And McCall Noelle Doyle added wonderful acting and comedic skills to her beautiful voice that highlighted many of her scenes.  It was she who touched the audience with her rendition of Virginia O’Hanlon’s classic letter to the New York Sun asking if there really was a Santa Claus.

Technically the show was smooth and well designed.  Walking into the theater, the audience was immediately greeted by the warm homey set designed by Trena Weiss-Null.  It felt like a family living room complete with bedecked Christmas tree, a bookshelf full of classics (many of which were used to tell a tale), comfortable looking furniture and a fireplace.  The only thing missing was a cozy fire.

Director Jack Marshall, who also contributed to the script of the show, did an excellent job of keeping the show moving and dynamic.  Many of the songs could have lent themselves to static “park and bark” performances, but under Marshall’s direciton,  the show never stagnated..  The staging, blocking and direction were excellent. Lighting designer, AnnMarie Castrigno helped make many scenes special.  One such special moment: the mood created dimming the set with a special spot highlighting the Christmas tree.   Sound designer and engineer Bill Gordon also did a remarkable job.  The sound was wonderful and the timing smooth for the many sound effects, voiceovers and transitions.  Bill Gordon’s voice, sounding so much like an old time radio announcer, added a lot of ambiance to many of the scenes .

This show is a perfect diversion for the holiday season.  If you loved the classic television holiday specials from the past, or you want to get an idea of how wonderful they were, then you really should get out to see this show.

It really is beginning to feel a lot like Christmas.