The sixth Capitol Fringe festival got off to a rocking start Thursday night with the opening performance of frequent Fringers Katie Molinaro and Shawn Northrip’s collaboration On The Rag To Riches; a blisteringly funny riff on womyn-power, casual sex, and stupid boys. 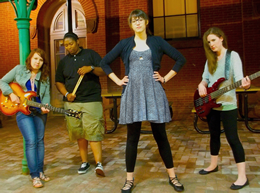 It’s rough, it’s sexy, it’s dirty and it barely hangs together. What we’ve got here, gentle readers, is the freaking platonic form of a kick-ass Fringe show. It’s all good, filthy fun.

It’s essentially a monologue delivered in rock-song form. Molinaro plays Janey, who has just dumped her most recent boyfriend via a brutal, hilarious e-mail. This leads to self-reflection as Janey ponders what in her nature has made it so difficult to have a healthy long-term relationship. Flashbacks ensue.

This would all be traditional and derivative riot grrrl stuff if it weren’t for Molinaro’s wicked sense of humor, her distrust of weepy sincerity and her clear suspicion that’s it ain’t all the boys’ fault. Even if they are stupid and deserving of being hit with rocks.

Janey keeps it real, yo, and mocks feminist tropes with the same disdain she harbors for the various ex-boyfriends. Think of it as a new generation of performer casting a suspicious, rebellious eye towards Eve Ensler’s over-saturation of the feminist market.

The whole thing would suck if the band, dubbed The Bitches, didn’t bring the rock.  But consider the rock broughten, brothers and sisters. Veronica Hunt is the standout on guitar, drummer Danielle Ray provides a steady beat and big-time DC actress Casie Platt drops a mean baseline.  Director Michael Dove seems to have largely stayed out of Molinaro’s way, and that’s a compliment. Over-choreographing a show like this could drain it of it’s riotous. Molinaro should be left free to let her id run wild. The whole show rests on her slender shoulders. Thankfully, Molinaro proves she’s got the acting and singing chops, with charm and sex appeal to spare.

So why ain’t this review a glowing five-out-of-five? Because there are few frustrating and very fixable problems that keep On The Rag from the Fringe classic it could and might soon be.  While Molinaro’s singing is generally solid, I detected some trouble with high notes in the early songs. Things improved in that regard as the night went on, which leads me to believe that a few more minutes of vocal warm-ups before each each performance would do the trick.

But oh, dear God, those transitions need to be fixed. During scene changes, Molinaro invariably retreats to the same back corner, changes her costume, maybe grabs a quick drink of water, and comes back downstage. Every single time this happens, the show grinds to a halt. This show is like a shark, if it doesn’t keep moving, it dies.

I humbly offer a potential solution: have a box full of costumes right there up front.  When a costume change hits, just grab the gear, toss it on and keep on a rockin’! There’s already another box chock full o’ props sitting right there so it would fit with the grungy aesthetic and shave a good couple of minutes off the runtime. And nobody would fault anyone for having a bottle of water in the Baldacchino. The audience was roasting Thursday night.  I can only imagine what it was like under those hot lights, especially with the kind of kinetic performance Molinaro delivers (by the end of the night she’s absolutely shining with sweat in true rock star fashion). We know it’s hot up there. Go ahead and take a drink.

The story of Janey’s romantic history doesn’t so much wrap up as fade away. By the final ten minutes all narrative has been thrown out the window and the show has become more concert than play. Two false endings skirt the edge of audience patience, especially when those songs could have been easily fitted into the show proper. Perhaps this was Molinaro and company’s way of including the traditional rock concert encore in a Fringe setting? If so, I’m afraid it just doesn’t work in the confines of Fringe’s notoriously tight schedule.

But still, fun was had and faces were properly melted. All is well in the Baldacchino.  Molinaro presents the dark side of the coin to that omnipresent contemporary character: the manic-pixie-dream-girl. You know the one, the quirky girl from the indie rom-com who doesn’t know how hot she is behind her hipster glasses and will always see the sensitive soul hiding behind our hero’s nerdy/gruff/rude exterior? Molinaro and Northrip beat that girl up and take her lunch money. So call Janey the depressive-harpy-nightmare-girl with a serious chip on her shoulder. The show’s all the better for the snarky self-awareness.

Provided Molinaro, Dove and company fix a few lingering problems, On the Rag to Riches is poised to be a breakout hit of this year’s Fringe. Rock on with your bad self, Janey.

On the Rag to Riches has 4 more performances to go at Fort Fringe, 607 New York Ave, Washington, DC.
Tickets

Ryan reluctantly rates this a 4 out of a possible 5.