Faced with the sad decline of the American soap opera, where can a hungry populace turn for their daily fix of melodrama and overblown romance? It’s Opera Alterna to the rescue, offering up a slice of daytime drama with a classical twist in their inspired musical farce, Gallantry: a Soap Opera in One Act. 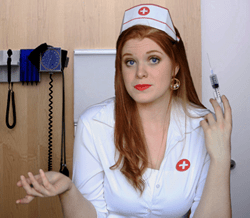 Gallantry takes place in a TV studio during the live taping of the titular soap. Replete with commercial parodies and even actor smoke breaks, the whole production sends the audience a knowing wink from the very first scene. It’s a hospital drama which hinges on the tortured love triangle of oblivious appendectomy patient Donald, voluptuous Nurse Lola, and the scheming Dr. Gregg.

The experienced cast proves themselves up to the challenge of Douglas Moore’s taxing score. Emily Casey and Tad Czyzewski showcase impressive range and blending skill as the doomed duo of Lola and Donald, while Rebecca Stugart utilizes her lilting mezzo and bright smile to extract a memorable performance from the otherwise secondary Announcer role. As Dr. Gregg, James Rogers’ physical comedy skills provide a hilarious counterpoint to his stern, commanding baritone.

The production’s one downside is its relatively short runtime. Measuring in generously at 30 minutes, it is by far the shortest Fringe production I’ve ever encountered. After the bows, the audience stayed in their seats for a few bewildered moments, waiting for an encore. While it can be painfully obvious when a composer inserts a throwaway ballad to fill time, paying audience members might be justified in requesting a few more songs in this case.

Gallantry: A Soap Opera in One Act has 2 more performances at the Warehouse, 645 New York Avenue, NW, Washington, DC.
Tickets

Ben Demersis a longtime DCTS writer and board member, lifelong theater enthusiast, and sometime performer. Since 2009, he's covered a wide range of wonderful theater productions across DC, MD, and VA, developing a particular soft spot for small, quirky productions. When not writing about theater, he works as a digital marketing professional and enjoys exploring DC's cultural and restaurant scene with family and friends.