Dreams are often beautiful and always surreal. They sweep you into their world without qualification or disruption.  They are immersive and expansive, but at the same time deeply personal. Priscilla Dreams the Answer is very much like a dream. For the short time that it lasts, it is stunning, and like any good dream, you leave wanting more. 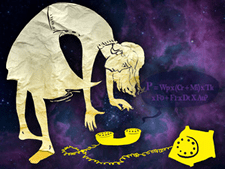 Though its structure is like nothing you have ever seen, it feels natural and almost normal because it is so thoughtfully constructed. As in a dream, you can look at anyone on stage and truly feel their emotion even if those emotions are foreign or absurd. I am so glad that Priscilla is a play, and not at dream, so that I can encourage you to share the experience.

Every year I go to the Capitol Fringe Festival in the hopes that I will see a play like Priscilla Dreams the Answer. It is stunningly written by Walt McGough.

There are 5 actors on stage the entire play for the entire hour, and they serve as the show’s narrators as well as its characters.  They take turns trading off lines as they explain the story to the audience, a device that could have been too literal, but in Emily Todd’s capable directing hands instead comes off as fresh and powerful. The technique takes a story that might otherwise have felt strange and foreign and makes it seem somehow universal.
The plot, that Priscilla is contacted by aliens to save the world by befriending a Ken Jennings style game show savant, could have been too weird even for me, but here, it is handled with surprising delicacy and grace. It is presented not so much for its plot as for its emotions. We watch the characters feel their way through these absurd circumstances.

The cast of five are all excellent.  Raven Bonniwell in particular gives an earnest and impassioned performance as Priscilla – I even saw real tears at one point.  But she is not alone. All of the actors are excellent.  More than any other show I’ve seen this week, I was impressed by how each actor gave so thoroughly of themselves from start to finish. Bonniwell, Luke Cieslewisz, Tiffany Garfinke, Aubri O’Connor, and Stephanie Svec should all be commended.

And they had such great material to work with.  McGough’s characters are fresh and ingenious.  Unlike some other shows I’ve seen this week, nothing feels hastily drawn or derivative.  He clearly spent time writing roles that were purposeful and powerful.

I also want to give a quick shout-out to the sets and props, designed by Betsy Haibel and Tiffany Garfinkle respectively.  They were remarkably well thought out and constructed for a Fringe show.  The multifunctional set pieces that could be turned around to represent the two main locales of show would have been impressive even outside of Fringe.  Well done!

The play was certainly not flawless, but like any good dream, I see no reason to nitpick any inconsistencies. What I will say is this: I cannot wait to see what’s next from Nu Sass Productions, who described themselves as “a DC-based female-oriented dramatic production company”.

With quality work like this, who knows what other dreams may come.
Priscilla Dreams the Answer has 3 more performances at the Warehouse, 645 New York Avenue NW, Washington, DC.
Tickets

Josh gives this our top rating, making it a Pick of the Fringe.