And in the 1970th year anno dominum, God created the concept musical. Only in this particular case, “God” would be Stephen Sondheim. Ask any musical theatre nerd, though, and they’ll probably respond, “Yeah, that sounds about right.”

Stephen Sondheim has many quirks as a composer and dramatist, but none more appreciable right now than this: he loves to record his work for posterity. Hop online, and you’ll find no fewer than eight separate recordings of his works in live performance. We’ve got two separate Sweeney Todds, the original Broadway casts of both Sunday in the Park with George and Into the Woods (perhaps the single best “live on video” recording there is), and British “Digital Theatre” recordings of both the acclaimed outdoor Into the Woods and Donmar Warehouse’s instantly legendary Merrily We Roll Along (which screened in movie theaters stateside just last week and is hopefully receiving its own home release soon).

Now, too, we’ve also got two separate recordings of Company. And what a wonderful pair of contrasting pieces they are.

First, you’ve got John Doyle’s 2007 revival starring Raul Esparza. A sleek, modern reinvention, it is a truly one-of-a-kind production, with actors doubling as musicians, a deeply psychological, minimalist aesthetic (right through to the acting style), and a knock-out lead performance from Esparza.

I should preface by saying that Doyle’s production is one of my all-time favorite pieces of theatre, as it seamlessly fused story and concept, boasted some of the best acting I’ve ever seen (beyond just Esparza), and created a true sense of “once in a lifetime” live art through the thematic instrumental doubling and its integration into the characters and story. Beyond mere concept, though, it’s not really a traditional Company. It’s geared towards introspection throughout, and acts more as character study than concept musical. 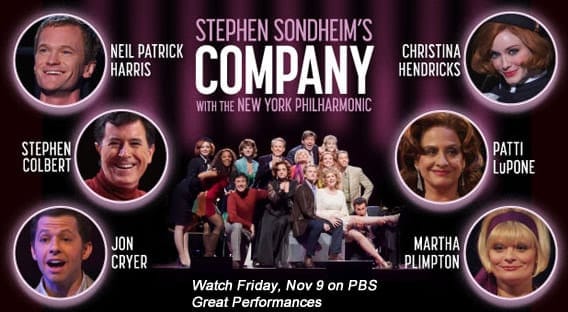 Today, though, we talk about a newer recording, filmed live with the New York Philharmonic in 2011, and released in theaters nationwide soon after. Featuring an all-star cast befitting a one-night-only event like this, as well as a rare listen to the full glory of the original orchestrations, this is your best way to see Company in its original recipe.

This is Company as born and bred, the anecdotal musical comedy about relationships. Zippy, satirical, fun, and a bit sad, this is the play that George Furth wrote and Sondheim composed. It features period costumes and the full glory of the “Tick Tock” Donna McKechnie ballet (here danced by Chryssie Whitehead as Kathy).

What you’re getting here is exactly what you expect from the poster: a very famous cast doing a very good job with a very good show. You’re getting sharp execution, if not revelation. As far as musical comedy goes, though, God-Sondheim was good to us, and gave us an exceptional cast for such an occasion. I mean, geez, just look at that list: Stephen Colbert for the pop culture flash, Jon Cryer for the sitcom star power, Martha Plimpton for the prestige, Jim Walton for the theatre nerd, Christina Hendricks for the Mad Men fan, Jill Paice for the astute fan of current rising talent (and the local DC snob who’s seen her on Signature’s stages a few times), Anika Noni Rose, Katie Finneran, Craig Bierko, Aaron Lazar, and Jennifer Laura Thompson, all lending veteran Broadway service. And Patti freaking LuPone.

And, at the center of it all is pop culture’s favorite emcee, Neil Patrick Harris. For my money, Harris is one of the most solid professionals in the business right now, as comfortable hosting the Tonys as he is making a self-deprecating cameo in a Harold and Kumar flick, or playing lovable lothario Barney Stinson on How I Met Your Mother, or igniting Internet fandom as the aspiring supervillain title character of Dr. Horrible’s Singalong Blog. He’s made several trips to Broadway as well, and has the skill to put him past the level of stunt-casting.

To say that a show lives and dies on the quality of its lead is a critical cliché, but in the case of Company, and Robert, it is never more true. Here, Harris does a fine job anchoring the event and leading the very diverse cast to unity in a single tone. Right from his first moments, Harris brings both a gravity and lightness to the character, equally important in this case. Harris knows his way around the witty dialogue, but truly impresses in the moments in between, where we get a chance to look at the loneliness behind it all.

Harris, however, is in immediate danger of being upstaged by the true star of the presentation – the New York Philharmonic, of course. This is first and foremost a concert presentation, and that luscious, full group, under the Sondheim-expert baton of Paul Gemignani, shines brighter than any of the marquee names present. It’s the sad truth that most of us have only ever heard Jonathan Tunick’s full orchestration on a 40+ year old recording, and to hear it played live, and captured in a modern acoustical environment and with advanced recording devices, is simply marvelous. It is unapologetically ‘70s-sounding, but the clear light of great recording, you get to appreciate just how great that actually is.

Despite their variety of backgrounds, the cast finds themselves in good form, though obviously there are standouts. Patti Lupone, obviously, was born to play Joanne. She eats the zingers for breakfast and bats “The Ladies Who Lunch” out of the park. Jon Cryer proves to be surprisingly nimble in his scenes and, who knew, actually has a nice voice on him, too. Colbert and Plimpton look like they’re having a ball bouncing off each other in their early scene accompanying “The Little Things You Do Together”. In general, the scene work fairs very well, and I could spend a couple paragraphs saying “so and so was great, and this way funny, and that was funny, and I liked this part and that part a whole lot”, but the gist is this: the acting is uniformly great, and the couple chemistry is delightful.

It’s the ensemble vocals where things get a little shakier, but fortunately never too bad. The one major downside to hiring a mostly celebrity cast, even if they can sing, is that the group sound isn’t as great as it could be. A small ensemble, clad in all black and mostly relegated to pushing furniture around, helps flesh it out where possible, but there’s still the occasional moment like “Sorry-Grateful” where you wish for something a bit more robust.

For a “concert production,” there is a LOT of staging. Given that Company isn’t a conventional, plot-driven musical, this could almost fly as a full production. Necessary set pieces are present, scenes are fully blocked and comically polished (kudos to director Lonny Price), and numbers like the opening and “Side by Side by Side” boast fully choreography as well (by Josh Rhodes).

Company is an interesting beast, in that production to production it can vary so wildly, and offer much to even folks who have seen it multiple times. That’s why there was room enough in my heart for both this and my beloved Doyle production. It’s why the show will likely survive the planned revised version that Sondheim is currently working on. It’s why it easily deserves a place on my DVD shelf (or digital Watchlist these days) next to those other great Sondheim recordings.

More to the point, it’s why, when airing for free on PBS, there is no question that you should watch it, whether you have any love for the piece or if you’ve never seen it. Especially if you’ve never seen it. This is a great, pure Company, and a fine exposure to a versatile masterwork of musical theatre. Even if you actively hate the casting, check it out for the orchestra, because that right there is a rare gift.