Manifesto! is a joyous flight into the world of physical theater. Entire schools of thought are turned on their head and spun into zany interpretations with heart-pumping theatrics. Every word, noise and movement is finely tuned to leave you in hysterics. Characters fly through the air in slow motion sequences. The art movement, Dadaism, is defined and redefined nearly 50 times. 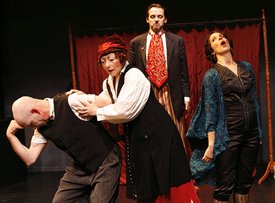 A gem of the Capital Fringe Festival from Happenstance Theater, Manifesto! is a visual interpretation of the convergence of Futurism, Dadaism, Communism and Capitalism. The dialogue is a melting pot of the language from several manifestos including Manifesto of Futurism, The Art of Noises to Dada Excites Everything, and more. The radicalism begins in a cozy café, where three delectable clowns exercise their slapstick humor. Suddenly, the café transforms into the Cabaret Revoltaire, a world that holds no finite limits or clear boundaries.

A pre-requisite entails only an open mind and taste for the absurd but not necessarily an in-depth understanding of Dadaism or even general understanding of 20th century artistic movements. What is not defined in plain language is compensated for in each character’s ability to both act and express a feeling with dashing verve. The experience evokes the theater of Charlie Chaplin, and even may dance you into a beret-wearing phase while reading radical political and social texts.

The production is complete with original music and uses a variety of sources from household objects, to bells and harmonica. The music fuels the mood, which ranges from dark to light-hearted. The music and visual components of Manifesto! function to create a harmonious and thrilling cabaret experience. This is highly entertaining physical theater that will have your senses jumping.

The play is also performed cyclically and we as audience members experience the life of the cabaret in what appears to be a day but feels like an eternity. The production is a beautiful reminder of the endless creative opportunity theater has to transform the human spirit.

This is not a play to see if you desire a linear beginning, middle and end. Manifesto! is intentionally jumbled to illustrate the very artistic, social and political movements it attempts to capture. The result is a superbly colorful portrayal of the interaction between critical movements that arose in the 20th century.

Breena gives this our top rating, making it a Pick of the Fringe.